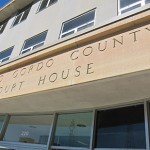 MASON CITY – A woman who was accused of tampering with her time card while she worked at the Cerro Gordo Courthouse – and then was fired – lost an appeal Monday alleging wrongful prosecution.

Debra Perzynski of Mason City was accused by officials of tampering with and altering her timecards on a number of occasions, resulting in $1,600 in overpayments.

The 8th U.S. Circuit Court of Appeals upheld a decision by Leonard T. Strand, a United States Magistrate Judge for the Northern District of Iowa, who earlier had dismissed her lawsuit which was brought against Cerro Gordo County and two individuals, Kenneth Kline and Heather Mathre.

Perzynski had been charged with theft in the second degree in 2010 following the timecard tampering allegation.  The charge was thrown out by a judge.