Some North Iowans not happy with secrecy in Clear Lake development

NIT – A number of North Iowans have expressed concern with the secrecy of public officials in refusing to name a company that agreed yesterday to a major development in Clear Lake.

The name of the company will not be disclosed for up to 18 months, officials have said, as construction of the $65 million dollar warehousing operation is undertaken, beginning this spring. 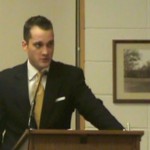 North Iowa Corridor Director Brent Willett.
What is there left to hide?

Only a handful of North Iowa public officials have admitted that they know the identity of the company, including Clear Lake Mayor Nelson Crabb, City Administrator Scott Flory, Cerro Gordo County Supervisor Jay Urdahl and County Administrator Tom Drzycimski, as well as Brent Willett of the North Iowa Corridor.

The City of Clear Lake and Cerro Gordo County are allocating millions in loans and tax breaks to the un-named Fortune 100 outfit.

NorthIowaToday.com has fielded a number of calls and emails from concerned citizens, asking why the name of the company cannot be made public.

Today, some are asking “Why not name the company now?”

A person who owns land in the vicinity of the proposed development in Clear Lake’s industrial park may take the issue to Des Moines and seek release of records, citing public information and sunshine laws.

“My question how can I go about finding out who this company is that is getting millions in tax breaks,” the North Iowa resident asked. “How can a office holder vote to offer these breaks and not even know they are going to?”

A representative of the Iowa Freedom of Information Council at Drake University told the resident as he sought advice that it is “outrageous” that the name of the company is still being withheld:

Good grief. There is no discussion of why this company wants to remain anonymous or the propriety of approving such a large development deal, including forgivable loans, without naming the company that will benefit from this public largesse.

Any documents in the possession of a government official or government body or office are public records, unless they fall under an exception either in the Iowa Code or some other federal or state law. This includes emails in which government officials discuss the deal. You can file a public records request with the government body or official who holds the records you seek. (See www.ifoic.org for an example of a records request letter, though the request can be in any form.) If the record custodian wants to withhold the information, he or she must cite a specific area of the Code that allows confidentiality. (I’m not sure if the North Iowa Corridor EDC would be considered a government body for purposes of the law, but the city and county certainly would, as well as the government officials mentioned.)

This also sounds like something that Lee Rood, a reporter with the Des Moines Register who specializes in freedom of information issues as the “reader’s watchdog,” might be interested in pursuing. It seems pretty outrageous.