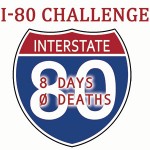 DES MOINES – Police agencies in eleven states that encompass Interstate 80 have totaled their work from July 24-31, 2013. The results reveal the new, nation-wide I-80 Challenge enforcement project had a strong impact on traffic safety.

The I-80 Challenge was created as part of the National Highway Traffic Safety Administration’s More Cops, More Stops campaign. This eight day effort produced not only a reduction in fatalities over the national average, but also enabled officers to step up their efforts to deter poor driving habits and gain voluntary compliance of traffic laws. The eleven states from California to New Jersey dedicated nearly 23,000 enforcement hours to the I-80 Challenge. The officers working along I-80 removed 162 impaired drivers from the road, and issued 14,274 traffic citations and 9,411 warnings to passenger vehicle drivers. Additionally, 1,711 citations and 2,978 warnings were issued to commercial motor vehicle drivers.

The I-80 Challenge was designed to target traffic safety in an effort to save lives. Through their efforts however, officers were also able to apprehend numerous subjects utilizing I-80 for criminal activities. During the I-80 Challenge 92 drug charges were filed and more than 2.5 million dollars’ worth of illegal drugs were confiscated. Three states reported seizing weapons during traffic stops and an arrest on an active warrant for grand theft occurred.

“Tragically, too many people are killed each year because of automobile crashes. It is our duty as law enforcement officials and highway safety advocates, to enforce traffic laws and to continually find ways to reduce traffic‐related deaths and injuries. The I-80 Challenge was a focused, data-driven approach at eliminating fatalities along the nearly 3,000 mile coast-to-coast highway. The I-80 Challenge model is something that could be replicated by law enforcement across the United States in order to educate drivers and large truck and bus operators on highway safety and the importance of compliance. In our opinion, one death is too many, and as law enforcement officials we will continue to do everything we can to prevent these senseless fatalities.” IACP President Craig Steckler.

Although the ultimate goal of the enforcement effort was to prevent all fatalities on the 2,900 miles of Interstate 80, two people died in traffic crashes during the eight-day effort. These fatalities happened in Nebraska and Ohio. Law enforcement leaders knew eliminating all fatality collisions during the eight day period was an aggressive goal and would be extremely difficult to achieve. But, for highway safety professionals, accepting even a single fatality was not an option.

“Sadly, two lives were lost during the Challenge but the overall success of the project is clear. We need to continue to make traffic safety a priority in the U.S. and continue looking for innovative ways to reduce fatalities and serious injuries on our nation’s highways,” said Patrick Hoye, Bureau Chief of the Iowa Governor’s Traffic Safety Bureau and I-80 Challenge coordinator.

The I-80 Challenge was created to save lives and to create public awareness of traffic safety through both an increased law enforcement presence and a strong media outreach. The enforcement effort not only focused on passenger vehicles but included increased patrols for commercial motor vehicle violations. Eleven State Police/Highway Patrol agencies along I-80 participated in the effort, which drew strong support from the U.S. Department of Transportation’s National Highway Traffic Safety Administration and Federal Motor Carrier Safety Administration (FMCSA).

“Safety must be the top priority of every driver every time they get behind the wheel of a motor vehicle,” said FMCSA Chief Safety Officer and Assistant Administrator Jack Van Steenburg. “It is vital to buckle-up, obey the traffic laws and give large trucks and buses plenty of space to maneuver. By sharing the road and enforcing traffic safety laws, we can help ensure that every traveler reaches their destination safely.”