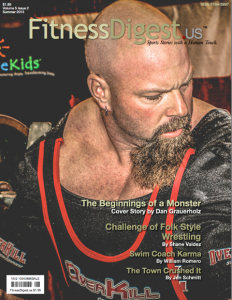 By Mark Miller of Mason City, Publisher of FitnessDigest.us –

April has been a busy month. Volume 5.1 is going out to free back-issue subscribers just as we are putting the final touches on this issue, Vol. 5.2.

Looking back at Vol. 5.1.  The stories were some of the best we have ever received. It was also the first issue that was read through by an editor. Thanks to Richard Johnson for joining the team, part-time. If you are a new subscriber and want a copy of 5.1, email us. We will get you a copy for your archive. (Subscribers can also request copies in resolutions up-to 300 dpi.) I’m excited to get it sent out to the free-back issue subscribers. That list is growing dramatically. If you like a story or photo in FitnessDigest.usmention US to a friend. For extreme excitement find us online! We deliver through many popular social media channels.

This issue is another great collection of stories. I’m calling it America’s Power Men issue. Consider this: 5.1 was mostly female contributors, 5.2 is almost all male. We have stories on power-lifting for HopeKids, writing about Folk-style wrestling, a memorial run for a heroic Navy Seal, a Miami swim coach passionate about saving lives, and a book review for a popular ultra runner living in Boston, Massachusetts.

The power-lifter story comes from North Iowa. The lifter’s name is Dan Grauerholz. Dan is part of the Relentless lifting events which are raising awareness for a national organization called HopeKids. Dan is using his 600+ lb. bench press to raise awareness for a great organization. HopeKids helps children with life-threatening diseases. Like so many of the athletes we feature, Dan uses his talents to increase donations for HopeKids. In a recent event Dan and his team raised over $100,000! Learn more about the Relentless team and how Dan is helping them. If you can contribute to his efforts, please let him know with a donation.

I feel that the strategy FitnessDigest.us uses to encourage digital preservation works to help preserve legacies. Our next story is as important as any. Each autumn in Rockford Iowa there is a memorial run for Jon Tumilson, Navy Seal – who died in action. Jon is an American hero and the memorial run honors him and other members of the U.S. Navy Seals. The weekend is a celebration of veterans and American patriots too. People from all across the USA are making a pilgrimage to Rockford for this year‘s 5K. The weekend is more than just a 5K run though. They have live music, the Army rock-climbing wall and more. It’s all put together at a world-known fossil park. I’m happy to help get the word out about this event as well as honoring the sacrifices that Tumilson and other members of the military have made. The story Jen Schmitt wrote is touching and heartfelt. Jen helps readers understand that what the Seals do is an important part of American’s history. Well worth preservation.

Wrestling has been a hot topic here in Iowa lately. So, I went on a mission to get a wrestling story. We contacted Shane Valdez who coaches for the Oklahoma Elite wrestling team. Shane has worked out with a wide variety of champion wrestlers. He is also a talented writer. I must give a little background on why I was so intent on a wrestling story for Vol. 5.2. Iowa is a premier wrestling state and I grew up watching Olympic Champion wrestler and former University of Iowa coach Dan Gable on Iowa Public Television. The University of Iowa is unmatched when it comes to national titles in the sport. Just as I was writing this, Iowa Rep. Sharon Steckman contacted me to let me know that coach Gable was at the Iowa Capitol. The legislator has created Dan Gable Day. On top of that, the NCAA National Championships are just getting started here in Iowa. Combine that passion with the news of wrestling being dropped from the 2020 Olympics – that really gets the Iowa blood pumping. From what I’ve seen and heard here in Iowa, I’m confident that USA wrestling can and will do what it must to get Folk-Style wrestling back in the Olympic arena. For me personally, it feels like the sport has such a rich history in the Olympics. Dropping it affects the overall image of the games for me. I believe it is a must-keep sport. We must remember that wrestling is still very popular world-wide. The growing popularity of MMA (Mixed Martial Arts) will only fuel the passion. Combine all that and I think it is great timing for a wrestling story.  Shane Valdez gives non-wrestlers great insight into the challenges of the sport. Much of what Shane writes about can be appreciated by any reader facing a challenge. I think that the more you read the more you will become a fan.

We also got a cool story from a swim coach in Miami. William Romero is a coach and swim lesson instructor. Every time I spoke with him he mentioned that his efforts are about saving the lives of children. I can relate, being a swim lesson instructor myself. William has put together a low-cost aqua-safety book that parents can use to teach their kids how to be safe in and around the water. Be sure to read the whole story, it has a surprise end! Then check out his book for the most professional tips.

I ran across a great book of short running stories. We are featuring some fun reviews for it. The book, The Mid-Packer’s Lament, by Christopher J. Russell, can be found on Amazon and paperback. If you are a fan of the short narratives in FitnessDigest.us be sure to check out this book. I’m sure the writing style, humor and supporting details in his writing will appeal to our readers. I bought his book and enjoyed the stories very much. Here is my short review: Running is universal! I could relate to the funny, twisted stories Christopher serves up from Boston, even while living here in Iowa!

On top of that we have art nouveau cycling posters in the Look-Back feature. Their is a interesting page where we see opposing views about Lance Armstrong / LiveStrong debate. There are a few fun Ultra-Short Stories, our By-The-Numbers page, and once again we put together a collection of Re-Tweets. Those highlight some of what goes on with our Twitter @GoodeReads. Like always make sure to notice an advertiser or two. The team is made up of many parts now and we are thankful for everyone who is joining ‘US. It is amazing to think how big things have gotten – just a year ago the idea ofFitnessDigest.us had only a glimmer of hope. Now the light is starting to shine a little brighter. I hopeFitnessDigest.us can really electrify in 2013!