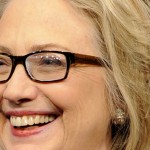 The Quinnipiac Poll pitted Clinton against Republican senators, Marco Rubio of Florida and Rand Paul of Kentucky. Peter A. Brown, assistant director of the Quinnipiac University Polling Institute in Hamden, Conn., said the major difference between Clinton and Biden “is that she runs much better among independent voters, although Sen. Rand Paul runs better among that key group than either Democrat” in polling on the 2016 presidential race.

Matched against Rubio, Clinton would get 48 percent of the vote to his 37 percent, the poll said, with Clinton leading 41 percent to 32 percent among independents. Her lead against Paul is 46 percent to 42 percent with independents going the other way, 38 percent for Clinton and 44 percent for Paul.

Clinton does especially well among women, leading both Republicans by about 20 percentage points. Biden also leads among women but far less strongly.

Quinnipiac surveyed 1,411 registered voters between May 15 and May 21 using telephone and live interviews. The margin of error is 2.6 percentage points.