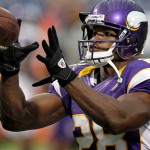 MINNEAPOLIS – Star NFL running back Adrian Peterson has come out against gay marriage.

“That’s not something I believe in,” Peterson said in an interview last week, ESPN.com reported, despite having family members who are gay.

Peterson was asked about the Vikings’ release of outspoken gay marriage supporter and punter Chris Kluwe.

Minnesota has legalized gay marriage and the law goes into effect August 1st.