Kerry: No role for Assad in Syria’s transition government 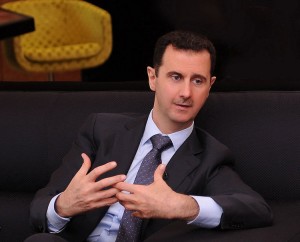 A handout photo distributed by Syrian News Agency (SANA) on July 3, 2012, shows Syria’s President Bashar al-Assad during an interview with a Turkish newspaper in Damascus. UPI

ROME, May 10 (UPI) — U.S. Secretary of State John Kerry said he sees no role for Syrian President Bashar Assad in a transition government trying to lead Syria out of civil war.

“The foreign minister will work with us, as they have, to try to bring all the parties to the table so that we can effect a transition government by mutual consent of both sides, which clearly means that, in our judgment, President Assad will not be a component of that transitional government,” Kerry said.

Kerry also announced the United States would provide an additional $100 million in humanitarian aid for the Syrian people, including $43 million to help Jordan deal with the influx of more than 500,000 Syrian refugees fleeing from the conflict that began in March 2011, Voice of America reported.

Judeh said Jordanian leaders appreciate the assistance because Syrian refugees now make up 10 percent of Jordan’s population and that could rise to 40 percent by the middle of 2014.

Kerry and Russian Foreign Minister Sergei Lavrov this week agreed to call an international conference for this month to press for peace talks between the Syrian government and rebels. The talks would be based on a June 2012 Geneva peace plan backed by major powers that calls for, among other things, the formation of a transitional government leading to elections. The plan doesn’t specify Assad’s political future.

U.N. Deputy Secretary-General Jan Eliasson said Thursday that Lakhdar Brahimi, the joint U.N.-Arab League envoy for Syria, agreed to remain in his post in response to the U.S.-Russian initiative.

The Syrian foreign ministry expressed confidence that its ally, Russia, would maintain a “firm stance” against foreign interference in Syria’s internal affairs while saying the credibility of U.S. support for a political solution depends on Washington working with its allies to stop “terrorism.”

“Terrorism” is a term the Assad government and government-owned media to describe the rebellion.