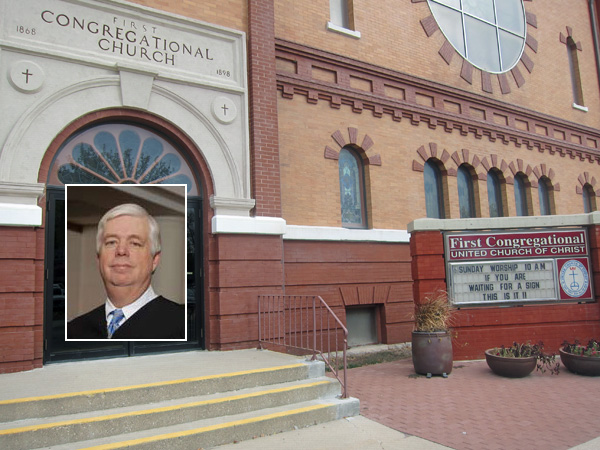 Justice Wiggins will be the main guest of a non-partisan forum on “The Role of the Judiciary” in Iowa hosted by the First Congregational United Church of Christ in Mason City.  The forum will be held in the church’s lower level dining room on October 14th and begins at 3 PM.  The church is located at 100 1st Street NE.

According to the Iowa Supreme Court website, IowaCourts.gov, for ethical reasons, justices refrain from talking about the court’s decisions and any case pending in the courts.

Pastor Patti Aurand of First Congregational said today that is wasn’t easy to get the judge to attend the forum.

“It’s been hard to get him here, he’s not wanting to campaign,” she said.  “He just wants some public awareness.”

Pastor Aurand said that this type of discussion fits well with her church and what it stands for.

“We are the only church in town to do same sex marriages,” she said.  “After the (same sex marriage decision) we had a  great conversation around that, what does marriage stand for.  Gender doesn’t make a difference.”

Pastor Aurand said her church has a long history of firsts.

“We were founded by abolitionists on the eve of the civil war.  We are known as Meredith Willson’s home church; we have the Willson Wing.  We ordained a woman in the 1850’s as first mainline denomination to do so, and we were the first to ordain an openly gay person, in 1972.”

Pastor Aurand said she hopes the discussion can be “civil and friendly” and that public awareness can be gained for the forum.