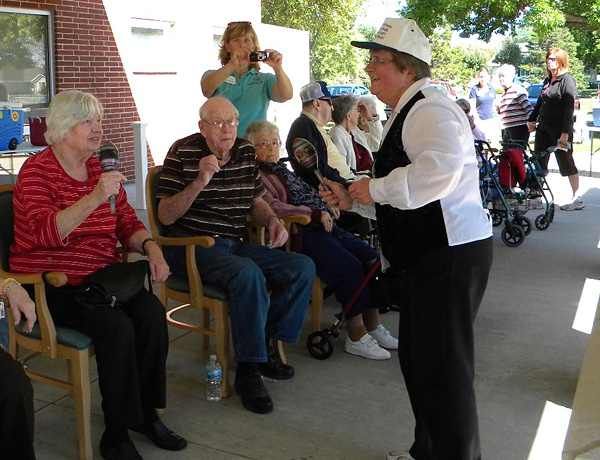 “We want the community to come in and see what we’re all about and to participate in some fun,” said Rachel Ringham, Marketing Director and Coordinator. “We’re kicking-off Assisted Living Week. Wednesday, we had about 300 people here enjoying a carnival”.

Sunday, the residents had the privilege of having Clarence and Barbara Heaver of Albert Lea, Minnesota playing some religious and oom-pa-pa polka music. Some of the residents got involved, playing an instrument or even doing a solo song.  (Please watch the video of the festivities)

There was a Classic Car Still Cruise, with around twenty cars on the premises for the people to look at, admire and reminisce about. Old friends got together, had many laughs, hugs and good times.

Kent Nitcher of Northwood, owner of Lil’ Orbits Donuts, was there making Mini Donuts “free” for everyone.  “I’ve been at the Worth County Fair, the Hancock County Fair and Hobo Days. I do weddings, graduations and other North Iowa Iowa events,” he said.

A couple other beauties that were there were the black and white ’56 Chevy and the black, “Kool ’57” Ford.

On August 3, 1978, President Jimmy Carter signed the proclamation claiming the first Sunday after Labor Day as National Grandparents Day. The statute cites the day’s purpose as: “…to honor grandparents, to give grandparents an opportunity to show love for their children’s children, and to help children become aware of strength, information, and guidance older people can offer.”

Marian McQuade of West Virginia, has been recognized nationally by the United States Senate and by President Jimmy Carter, as the founder of National Grandparents Day. She urged the youth to “adopt” a grandparent, not just for one day a year, but rather for a lifetime.