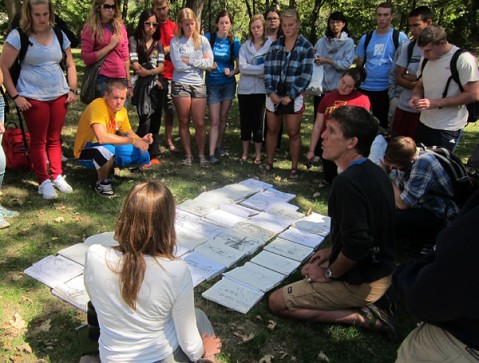 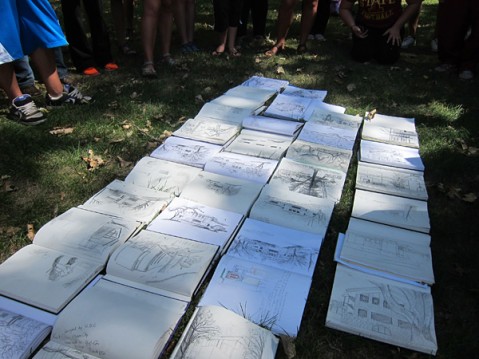 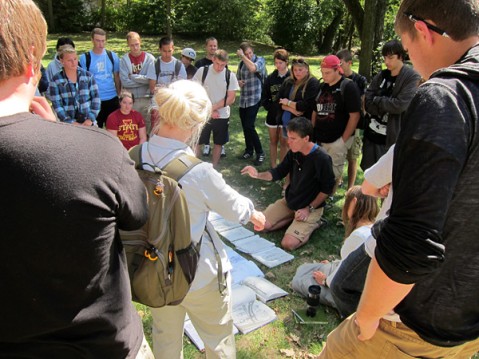 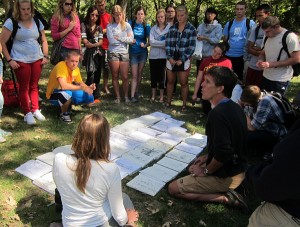 Their stop here was the first as part of a three week trip that leads as far away as Louisiana.

The trip is actually a class, professors and students explained.  Students make sketches of certain architectural landmarks along the way at each stop  and then are able to compare and contrast elements of each, noting how styles differ in each city or region.

Taylor Goetzinger, a 2009 graduate of Mason City High school and now an ISU landscape architecture student, is a part of the trip and one of a couple dozen students who were in Mason City on Monday.

“We are looking at Frank Lloyd Wright buildings and prairie style buildings,” she said, holding her sketch pad as she walked through the Rock Glen neighborhood. 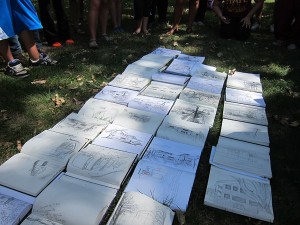 Sketches of Mason City landmarks made on September 10, 2012 by landscape architecture students from Iowa State University.

“Today in Mason City is our first stop of the trip,” Taylor said.  “From here we will stop in Minneapolis and then on to Duluth.  We’ll be comparing downtown areas and architecture.”

Taylor said stops at the Historic Park Inn was a highlight of the day so far as well as a tour of Max Weaver’s Z-Garden.

“I had been there before,” she said of the Z-Garden, “but no one else had, and they thought it was really creative.”

The Z-Garden is a creation of Mason City resident Max Weaver.  It is located on 2nd Street NE just east of Good Shepherd.

Julie Stevens, an Iowa State landscape architect professor, said the trip is really “a longer traveling class that we do with our incoming landscape architectural students.  We have been to the Frank Lloyd Wright Hotel, Z-Garden and now we’re sketching the Blake house.”

Michael Martin, also an Iowa State landscape architect professor, said he has been coming to Mason City for years.

“I’ve been coming to Mason City ever since I came to Ames, about 16 years ago,” Martin said.  “I thought what was interesting was the new sculptures downtown.  I was fascinated by the Z-Garden.  Max Weaver gave us the tour.  I think that sort of vernacular art… it is an interesting contrast to this sort of thing, a completely different kind of design.”

The students all agreed that Mason City “rocks.”

“The downtown area is really nice,” they all said.

“The hotel is awesome.  The ceilings are too short, though,” one taller student remarked. 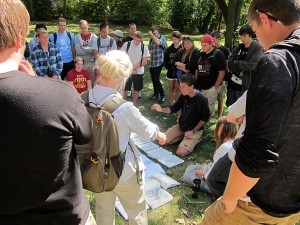