Offense out of sync in Panthers’ victory over Jets 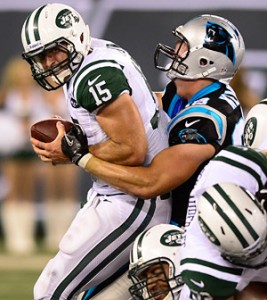 By Joseph Person, The Charlotte Observer –

EAST RUTHERFORD, N.J. — Carolina Panthers coach Ron Rivera wanted to see how his team would perform on the biggest stage – in front of a hostile New York crowd in a prime-time game on NBC.

It wasn’t always pretty, and for the second consecutive week the Panthers had to survive a last-second throw into the end zone. But when Tim Tebow’s final pass fell incomplete, the Panthers again had exited – stage left – with a victory.

The Panthers scored on two of their six offensive possessions with starting quarterback Cam Newton in the game, but their defense kept the Jets out of the end zone in a 17-12 win Sunday night at MetLife Stadium.

The Panthers (2-1) will finish their exhibition schedule Thursday at Pittsburgh. The Jets fell to 0-3 and still have not scored a touchdown in the preseason.

A week after surviving an injury scare from tailback Jonathan Stewart against Miami, the Panthers watched him get carted to the locker room near the end of the first half with a right ankle sprain. Rivera said X-rays were negative, but Stewart would not play against the Steelers.

The Panthers’ passing game looked out of rhythm without Pro Bowl wideout Steve Smith, who remained in Charlotte with an infected foot.

Newton completed 6 of 15 passes for 60 yards, was sacked twice and lost a fumble before giving way to backup Derek Anderson in the second half. Newton targeted his wideouts seven times, with only three going for completions.

But one was a 3-yard touchdown pass to Louis Murphy, who worked free in the end zone on a combination route with tight end Greg Olsen. Murphy, among those competing for the No. 3 receiver spot, started opposite Brandon LaFell with Smith out.

“Any time you don’t have Steve Smith, a player of his caliber, it does kind of throw some of the timing off. You do tend to get out of sync,” Rivera said. “We do miss Steve. … It just shows some young guys have to step up and make some plays when they get opportunities.”

Murphy, acquired from Oakland in a July trade, had three catches for 16 yards. Murphy had a strong showing (two catches, 29 yards) in the exhibition win against Miami, as well.

For the most part, however, the Panthers’ receivers had trouble getting open against the Pro Bowl cornerback tandem of Antonio Cromartie and Darrelle Revis. Besides Murphy, LaFell was the only other wideout to catch a pass from Newton.

“That was a real good test before the season because in our (division) we’re going to have a lot of good DBs also,” said LaFell, who had two receptions for 28 yards. “But that was one of the best tandems in the league. And there’s no better way to get prepared to go into the season than to face these guys up here.”

Meanwhile, the Panthers added to the Jets’ preseason woes under new offensive coordinator Tony Sparano, the former Dolphins coach. The Jets had not scored a touchdown in their first two exhibitions, while being outscored 43-9.

The Jets continually drove into Panthers territory only to settle for field goals. New York failed to score touchdowns in three red-zone trips.

Rookie linebacker Luke Kuechly led the Panthers’ defensive charge with 10 tackles, while veteran linebacker Thomas Davis contributed a sack in his first action of the preseason. Davis, attempting to come back from three ACL surgeries on his right knee, broke free on a first-half blitz to take down Mark Sanchez.

Sanchez was 11-for-18 passing for 123 yards and one interception – a Captain Munnerlyn pick on a ball that bounced off the hands of Jets receiver Stephen Hill. Each time the Jets bogged down, the boos got a little louder.

The jeers let up momentarily when Tebow replaced Sanchez in the third quarter. Tebow, who led the Denver Broncos to the playoffs last year before getting dealt in favor of Peyton Manning, drew the loudest cheers of the night with a 20-yard scramble on third-and-16.

But three plays later, Tebow was hearing the boos after throwing a gift interception to backup safety Reggie Smith.

Rivera said “it was a nightmare” watching Tebow run around the pocket in the final minute. Tebow drove the Jets inside the Panthers’ 30 and threw into the end zone on the final two plays. But as was the case all night, the Panthers held and the Jets walked off their big stage empty.