Republicans pour into Tampa — along with hurricane fears 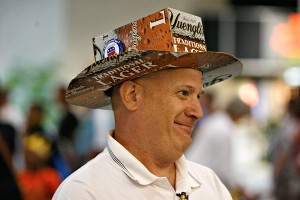 TAMPA, Fla. — Will the Republican National Convention be viewed, at least at the start, as Isaac’s convention as much as it is Mitt Romney’s?

The tropical storm churning towards the Tampa Bay area dominated news coverage and official talk Saturday as the first of 50,000 convention delegates, media and others poured into the region.

(PHOTO: Mayor of Tower City, Pennslyvania, and alternate delegate Dan Daub shows his support for his hometown beer, Yuengling, with a recycled hat, after arriving in Tampa, Florida, for the Republican National Convention, Saturday, August 25, 2012.)

Florida Gov. Rick Scott declared a state of emergency as Tropical Storm Isaac moved into the Caribbean, edging closer to the south Florida coast. Though Tampa was not expected to be in its bull’s-eye, the area was placed under a Tropical Storm watch.

The Tampa region could be hit by winds as high as 73 miles an hour starting late Sunday. The National Weather Service said there was a 72 percent chance the area could experience tropical storm conditions.

Convention officials said they have contingency plans, but would not discuss them publicly. Monday’s events could be easily shifted to Tuesday — the storm is expected to move away from the area early Tuesday morning.

The main Monday attraction, a speech by Mitt Romney’s wife Ann, has already been moved to Tuesday night so that broadcast networks would televise it. Those networks had scheduled no coverage Monday.

In 2008, Republicans dramatically altered their Monday program, which was to feature speeches by President George W. Bush, Vice President Dick Cheney and the governors of Louisiana and Florida. But as two hurricanes were heading for their states, the governors headed home, and the convention attended to routine business and corporate sponsors were urged to tone down their events and help raise money for possible hurricane victims.

Romney and President Barack Obama continued to spar Saturday in the hours leading up to the convention.

Romney was in Columbus, Ohio, where he and running mate Paul Ryan tried to paint themselves as champions of women. “Women need our help,” Romney said as he discussed women entrepreneurs.

“I can’t speak to Governor Romney’s motivations,” he said in an interview, the Associated Press reported Saturday. “What I can say is that he has signed up for positions, extreme positions, that are very consistent with positions that a number of House Republicans have taken. And whether he actually believes in those or not, I have no doubt that he would carry forward some of the things that he’s talked about.”

Democrats have been blasting Republicans for their plan to dramatically change Medicare, the health care program for seniors and some disabled people, and adopt policies making it much more difficult for women to obtain abortions.

The Romney campaign fired back by citing another part of the interview, in which Obama conceded, “We aren’t where we need to be. Everybody agrees with that.”

“President Obama concedes that ‘we aren’t where we need to be.’ Mitt Romney and Paul Ryan agree,” said Romney spokesman Ryan Williams. “The American people know they aren’t better off than they were four years ago.”