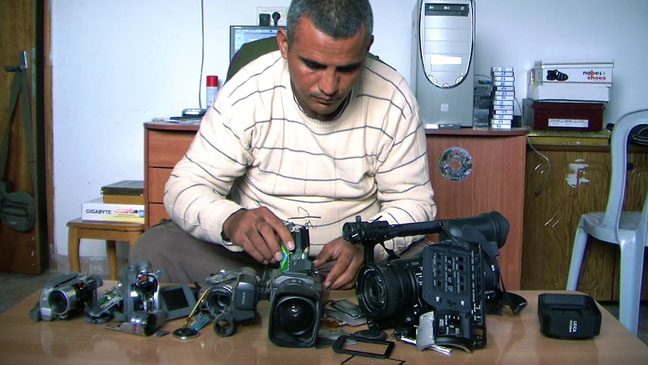 MASON CITY – The Charles H. MacNider Art Museum’s 2013 Winter Film Series, Films in February, Movies in March, ends this Saturday, March 9 at 2:00 p.m. with 5 Broken Cameras. Admission is FREE and open to the public. Popcorn will be provided.

An extraordinary work of both cinematic and political activism, 5 Broken Cameras is a deeply personal, first-hand account of non-violent resistance in Bil’in, a West Bank village threatened by encroaching Israeli settlements. Shot almost entirely by Palestinian farmer Emad Burnat, who bought his first camera in 2005 to record the birth of his youngest son, the footage was later given to Israeli co-director Guy Davidi to edit. Structured around the violent destruction of each one of Burnat’s cameras, the filmmakers’ collaboration follows one family’s evolution over five years of village turmoil. 5 Broken Cameras was an Academy Award© nominee this year for Best Feature Length Documentary.

5 Broken Cameras (2011), a documentary feature, is not rated (intense themes) and is 90 minutes long. It is in Arabic with English Subtitles. It is sponsored by Bob and Carrie Berg.

Thank you to everyone who has helped make the 2013 Films in February, Movies in March series a success: the Charles H. MacNider Art Museum Film Committee – Dean Genth, Terry MacGregor, and Kathy Kinsey for choosing such wonderful films; all those who generously sponsored a film or donated to the Film Series (past and present); and a big thank you to everyone who came to this year’s films. With out our fabulous viewers Films in February, Movies in March would not be possible. 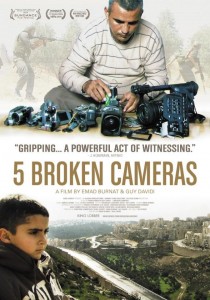