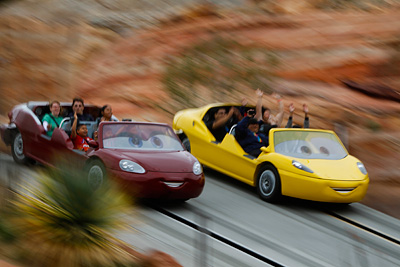 (PHOTO: The new Radiator Springs Racers ride in Cars Land debuts to the public at the Disney California Adventure Park on Friday, June 15, 2012, in Anaheim, California.)

Lutz, who has a long history of disclosing behind-the-scenes information on Disney’s two parks in Anaheim, said attendance hit 45,000 on Sunday.

Cars Land’s most popular ride, Radiator Springs Racers, broke down twice Friday, pushing the wait time for riders to 5 1/2 hours at some points.

“During the initial opening period for a new attraction, it is not uncommon to experience more down times than with other attractions while we are testing and adjusting,” said Suzi Brown, a Disney spokeswoman.

On Thursday night, at least 500 people camped outside of the park to be among the first to see Cars Land on its official opening day.

For the opening weekend, officials hired traffic control officers from the city of Anaheim and freed up additional parking. Despite the big crowds, Brown said, the flow of visitors into the park went smoothly.

The new attraction had already been visited by numerous invited season pass holders and by media representatives.

Cars Land is part of an estimated $1.1 billion overhaul of California Adventure aimed at boosting sluggish attendance numbers that have plagued the park since it opened in 2001 adjacent to Disneyland. Cars Land’s rides and landscape were inspired by the 2006 animated Pixar studios movie “Cars.”

In 2010, California Adventure drew slightly more than 6 million visitors, while neighboring Disneyland welcomed about 17 million, according to estimates by the Themed Entertainment Association and the AECOM engineering and consulting firm.