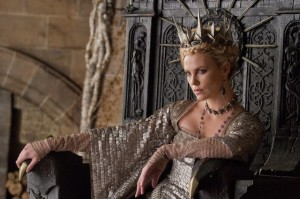 Moviegoers may be impressed by “Snow White and the Huntsman’s” computer-generated trolls, flying fairies and mythical beasts. But it could be Colleen Atwood’s complicated, handmade costumes that really steal the show.

(PHOTO: Charlize Theron as the Queen in the action-adventure “Snow White and the Huntsman.”)

The film’s Queen Ravenna (Charlize Theron) may be losing her grip on the title of fairest of them all, but she nevertheless tops the cast’s best-dressed list. In some cases, some of Ravenna’s 20 outfits (counting several multiple versions of the same gowns) took weeks to construct, though they might appear on screen for only a few seconds. One cloak constructed from feathers cost more than $30,000 to make, while four designers spent three weeks making one wedding dress. While Atwood and her team made more than 2,000 medieval-era costumes for the production — in one scene, more than 400 extras had to be outfitted — it is Ravenna’s wardrobe that directly echoes the themes director Rupert Sanders was trying to establish in his villain. “He wanted an element of skeletons and death surrounding the Queen, without it literally being bones,” Atwood said.

Early in the film, Ravenna becomes stepmother to Snow White when she tricks the princess’ widowed father, King Magnus, into marrying her. As Ravenna walks up the aisle in the wedding ceremony, her gown’s ivory satin and gold brocade suggests purity but her collar — which looks like the articulated ribs of a small mammal — sends a different message: I’m hungry, and you look like a meal.

Ravenna quickly murders the king and takes the throne. Her cruel reign brings hardship to her subjects and even vexes nature. Many of Atwood’s designs have an eerie, animalistic feel, reflecting the primal gloom the evil Queen casts over her realm. As Ravenna ages and becomes increasingly desperate for eternal youth, she at one point transforms into a flock of birds. It took a milliner two weeks to sew hundreds of black cock feathers into Theron’s avian outfit for the scene. “Each feather is individually placed and manipulated,” Atwood said. “If you don’t do that, you end up with a messy, feather-duster-looking thing.”

The bodice of another dress is covered with hundreds of iridescent black beetle wings, the leftovers from Thai diners, who eat the insects. “They were very, very difficult to work with because they were really sharp,” said Atwood, adding that each wing had to be drilled through to be attached. In contrast, Snow White’s costumes aren’t nearly as elaborate. Imprisoned as a young girl by Ravenna, she doesn’t exactly have access to the latest fashions, so her plain outfit — which she wears essentially throughout the whole movie — looks a bit like a hand-me-down. “They’d just throw her one of the lady’s dresses from the village,” Atwood explained.

The Huntsman, a drunken commoner dispatched by the Queen to track down the runaway princess, has similarly drab garb. His utilitarian shirt, jacket and pants are designed to feel like they were cobbled together from odd scraps of leather and fabric. “It’s his only clothing. It’s his second skin,” Atwood said.

There’s plenty of danger having the Huntsman and Snow White wear the same costumes for almost all of the movie. “You want something you don’t get tired of looking at,” said Atwood, the winner of three Oscars. But Ravenna’s costumes break any tedium spell.

Theron said that some of her costumes were uncomfortable to wear, but that was kind of the point. “A lot of my corsets were built like torture devices,” she said. “And all of that discomfort was very helpful, because I don’t think this character really loves herself.”