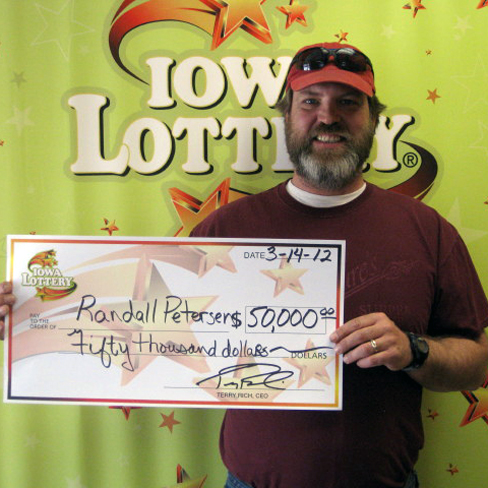 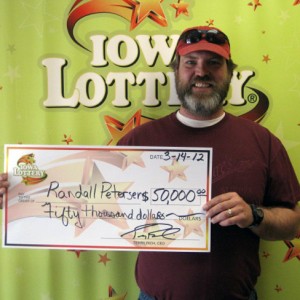 DES MOINES, Iowa – A Mason City man planned to stop for some lunch when he decided to pick up an “Aces High” instant-scratch ticket and ended up winning a top prize of $50,000.

Randall Petersen, 43, said he was traveling for work when he decided to purchase the ticket at Kum & Go, 2905 Fourth Ave. in Clear Lake.

“I saw that I had won so I called my boss and told him that I’d have to take the afternoon off,” Petersen said as he claimed his prize March 14 at the Iowa Lottery’s regional office in Mason City.

After deciding to claim his prize right after he scratched it, Petersen realized he’d better call his wife, Lynn, to tell her the good news, too.

Petersen said Aces High is one of his favorite tickets to play, but he never dreamed he’d win a top prize. He said he plans to use some of his winnings to pay bills.

Aces High is a $5 scratch game. Players win a prize by matching any of “your cards” to any “winning cards” to win the prize shown below that card. If players find an “A” symbol, they win double the prize shown. The overall odds of winning in the game are 1 in 3.55