This news story was published on March 21, 2012.
Advertise on NIT • Subscribe to NIT

MASON CITY – A Rudd man was arrested in Mason City Tuesday on a probation violation warrant.

Brandon Page, 38, formerly of Mason City, was wanted by authorities after he apparently violated terms of his probation stemming from an earlier crime. A warrant was issued for his arrest on March 15th.

Cerro Gordo County Sheriffs caught up with Page at 15 17th Street NE Tuesday afternoon at 2:35 p.m. and made the arrest.

According to online records, Page received 3 years of probation, a suspended fine of $750, and a suspended 5 year prison term.

Page is awaiting a hearing on his probation violation and is being held in the Cerro Gordo County Jail on $5,000 cash bond. 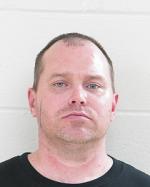