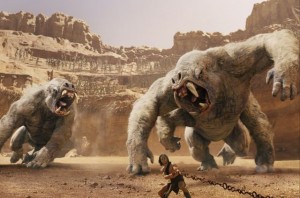 “John Carter” is to action movies as eggs, milk and flour are to a cake. All of the elements are there but they just haven’t come together to make a sweet treat.

The film, based on the Edgar Rice Burroughs novels, has ex-Civil War soldier John Carter (Taylor Kitsch) magically transported to Mars where he finds breathable air, 12-feet-tall warriors and a planet on the verge of being ruled by a group of immortals. Carter uses his newfound strength and jumping abilities — the bonus of lesser gravity — to wade into the war.

The script by Andrew Stanton, Mark Andrews and Michael Chabon mixes pieces of several Burroughs books in such an awkward way that the movie neither spotlights the planet’s battle nor the Earthling’s adventures. This story should have been a cosmic tale of good vs. evil but the story keeps getting bogged down by convoluted explanations and a wedding plot line that’s as dusty as the Martian surface.

And there’s no consistency.

Characters, who are supposed to be immortal, are easily killed with a gun.

These writing misfires keep the elements of the film from mixing and reduce its overall strength.

The stumbles also put more pressure on the cast. Kitsch, who is best known for his work on “Friday Night Lights,” delivers a performance that lacks the passion and fire to give the character life. When he wakes to find himself surrounded by giant green creatures with four arms, he acts mildly surprised. Even scenes with his potential love interest (Lynn Collins) have little spark. There’s a big difference between portraying a quiet hero versus a man who seems bored.

That these elements aren’t properly mixed is the failing of director Stanton, whose previous work includes “Finding Nemo” and “WALL-E.” He can’t get the same emotions and action out of the live-action production that he achieved with those animated efforts.

With a little more work, “John Carter” could have been a cinematic delicacy. All it proves is that Mars is a lifeless planet.