LOS ANGELES — When it comes to stocks, the U.S. is unexpectedly sitting on top of the world.

Stock markets from Berlin to Shanghai to Sao Paulo ended 2011 with double-digit losses caused by the European debt crisis and fears of slowing economic growth in China. That was a blow to investors who have been counseled in recent years to broaden their portfolios to supposedly faster-growing venues overseas.

Even in a year when America’s own credit rating was slashed, the nation’s biggest stock indexes somehow sidestepped the global rout. The Dow Jones industrial average rose 5.5 percent and the Standard & Poor’s 500 index broke even.

“It feels like it’s just been horrifically bad, like we’ve gone through another crisis and like the market must be off 30 percent,” said Jim Paulsen, chief investment strategist of Wells Capital Management in Minneapolis. “But it’s turned out to be a pretty good year.”

U.S. stocks benefited from strong corporate earnings and investors’ desire to huddle into the perceived safety of larger companies. The market also was boosted in the last month by data indicating that the domestic economy is holding up in the face of Europe’s troubles and may be gaining traction going into the new year.

When 2011 year-end statements arrive in the mail next month, many individual investors may be surprised to find that their portfolios held up better than they expected.

That’s what Paul McGhee has been telling his friends and family. An avid investor who works as a computer programmer at ESPN in Connecticut, he’s heard lots of griping from people about their supposed investment losses in 2011. But when he examines their accounts he finds they haven’t lost money.

“People tell me their portfolios did terribly and I’ll pick it apart for them and I’ll find they did OK, up 2 percent or 3 percent,” McGhee said. “People are discouraged about investing and their investments when, in fact, this was an OK year in the equity markets.”

Investment performance depends largely on where people stashed their money.

Investors who plunked big portions of their portfolios in European, Asian or emerging market bets undoubtedly are hurting. European and other international stock markets were pummeled by fear that the continent’s sovereign-debt crisis could spill into their economies and weigh down global growth.

Even China and other emerging markets, into which investors barreled in recent years because of their scorching growth, were affected. The Chinese stock market sank 22 percent this year, while the average emerging market stock mutual fund sank 20 percent, according to Morningstar Inc.

In the U.S., small-capitalization stocks — the most vulnerable to big market swings — were clobbered. The Russell 2000 small-cap index dropped 5.5 percent and the technology-heavy Nasdaq composite index fell 1.8 percent.

Losses were tempered by the solid showing of U.S. large stocks, bonds and gold.

The average intermediate-term bond fund rose 5.7 percent, according to Morningstar, as moves by the Federal Reserve to spur economic growth pushed down long-term interest rates. Gold had a record march higher this year, finishing 2011 up 10 percent.

Yields on Treasury bonds fell sharply as investors rushed into U.S. government debt amid the world’s financial uncertainty. U.S. bonds were viewed as far safer than most of their European counterparts as the continent struggled with its debt crisis.

Investors’ overall returns also were boosted by things such as dividend payouts and employer matches on 401(k) retirement plans. Counting dividends, the total return of the S&P 500 was 2.1 percent.

“For all the dramatic headlines and the volatility and the crazy market moves, there will be a collective sigh of relief as (investors) see that at the end of the year they’re largely unharmed,” said Don Montanaro, chief executive of online broker TradeKing.

Many investors found it hard to stay in the market given the extreme volatility that caused prices to whipsaw back and forth late in the year. Consider this for volatility: The Dow rose or fell more than 100 points on 104 trading days this year.

And investors fled. Through November, skittish investors yanked more than $100 billion out of stock funds in 2011.

As they were driving to a University of Michigan football game during the market sell-off in September, a friend told Rick Massuch that the fluctuations were wreaking havoc with his emotions.

“He said, ‘I can’t deal with this. I’ve got to get out,’ ” said Massuch, 53, a construction company owner from New Hudson, Mich.

Massuch and others who stayed in the market were rewarded as share prices rebounded in the final two weeks of December. 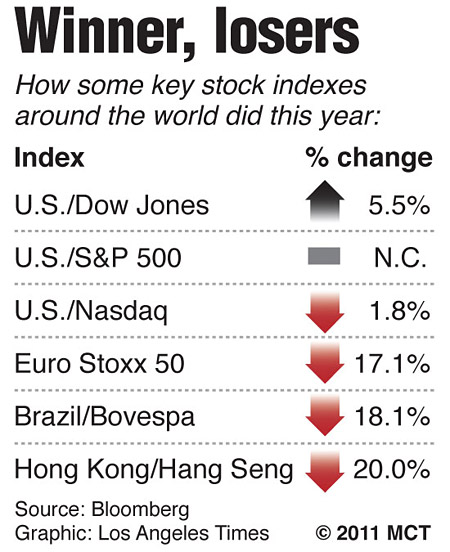