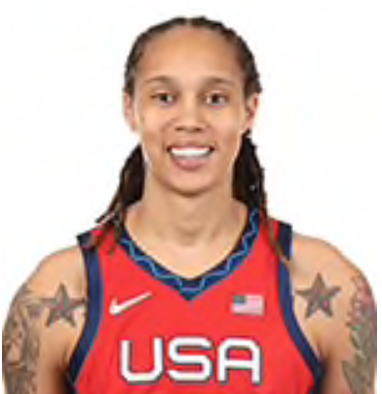 “Moments ago I spoke to Brittney Griner,” President Hoe Biden said this morning at a news conference. “She is safe. She is on a plane. She is on her way home.”

Griner is a 2-time Olympic gold medalist for Team USA. She is married to Cherelle Watson. She plays for the Phoenix Mercury of the Women’s National Basketball Association.

The news of late for the very tall basketball player had become more dire, as Russia announced earlier this month they were sending Brittney Griner to a remote Penal colony. In August, Griner was found guilty in a Russian court of traveling there with illegal drugs in her possession and sentenced to 9 years in prison.

Antony J. Blinken, US Secretary of State, had this to say on the matter:

“This morning, I joined President Biden, Vice President Harris, National Security Advisor Sullivan, and Cherelle Griner in the Oval Office, as Cherelle spoke to her wife Brittney, who is now on her way back to the United States and to her wife’s loving embrace. I am grateful to the State Department team and to our colleagues across the government who worked tirelessly to secure her release. I especially commend Special Presidential Envoy for Hostage Affairs Roger Carstens, who is accompanying Brittney back to the United States, as well as his entire team. We also extend deep appreciation to our many partners who helped achieve this outcome, including our Emirati friends, who assisted in the transfer today.

“While we celebrate Brittney’s release, Paul Whelan and his family continue to suffer needlessly. Despite our ceaseless efforts, the Russian Government has not yet been willing to bring a long overdue end to his wrongful detention. I wholeheartedly wish we could have brought Paul home today on the same plane with Brittney. Nevertheless, we will not relent in our efforts to bring Paul and all other U.S. nationals held hostage or wrongfully detained abroad home to their loved ones where they belong.”

Russia received in exchange for Griner, a Russian arms dealer.