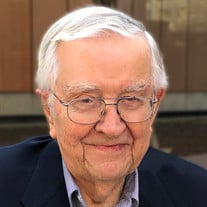 After graduating with a B.S. in Architectural Engineering in 1954, Keith spent a short time working for Henkel Construction in Mason City. He then spent two years in the U.S. Air Force, serving in Libya, Turkey, and Sioux City. Keith was discharged from the Reserves with the rank of Captain.

O. Keith Bowman’s motto in life was “It’s an adventure!” His earthly adventures ended December 29, 2022 in Des Moines when he passed away at the age of 90 from heart failure. A celebration of life will be held at a later date.

Keith was born to Orie B. and Jean (Smith) Bowman on October 7, 1932 in Perry. He was given the first name of “O.” in order to honor (and not offend!) both grandfathers, Orie and Oran. Keith was joined 18 months later by his brother Max. Their biological father abandoned the family and his parents subsequently divorced. Jean remarried Charlie Paist when Keith was about 8 years old, and Charlie and Jean raised Keith and Max.

During World War II, the family lived in Colorado Springs, Portland, and Seattle so that Keith’s stepfather could find work as a general contractor. They eventually moved back to Perry, where Keith’s first job was delivering newspapers on his bike. Later, he and Max both worked construction for their stepfather. Keith graduated from Perry High School in 1950 and attended Iowa State College (now University), where he joined the Phi Kappa Tau fraternity and ROTC. During summers, Keith worked for a petroleum pipeline company.

After graduating with a B.S. in Architectural Engineering in 1954, Keith spent a short time working for Henkel Construction in Mason City. He then spent two years in the U.S. Air Force, serving in Libya, Turkey, and Sioux City. Keith was discharged from the Reserves with the rank of Captain.

After his Air Force service, Keith returned to Mason City and went back to Henkel Construction, where he became a Registered Professional Engineer. More importantly, he met Janice Olsen, a Clear Lake native who was home from college at the University of Iowa. Even though she only had one more year until graduation, Keith swept her off her feet and she never returned to college. Keith and Jan were married on July 4, 1959, just six weeks from the day they met.

Keith and Jan welcomed a son, Scott, and the family settled into their self-designed California modern home in Mason City. They loved to go shopping in Minneapolis for eclectic, modern pieces for their home, and always owned one or more beloved cats.

Keith raced an Austin-Healey “Bugeye” Sprite in the Sports Car Club of America and became an SCCA steward in later life. Keith passed his love of sports cars on to his son, and he and Scott spent many happy decades together in the garage and at races. He was an avid golfer and member of the Mason City Country Club, and he and Jan enjoyed socializing with their Freaky Friday group. They made many trips to Denmark over the years, partly because Jan was 100% Danish but mostly because they both loved it.

In 1972, Keith joined the architectural firm Waggoner Mahaffey & Bowman. During the farm crisis in the 1980s, Keith became a certified mediator. In 1988, he joined The Principal Financial Group in the Commercial Real Estate Investment department. He and Jan moved to Des Moines and bought a home in the South of Grand neighborhood. Scott and his wife, Tracy, were thrilled to have them nearby, and Keith and Jan cherished being close to their two granddaughters, Abigail and Leah. The highlight of each summer was the annual “Gram and Gramp Camp” at their small cottage at Clear Lake, featuring craft projects, beach time, and drive-ins.

Keith retired from Principal in 2003 and consulted on the Des Moines Riverwalk project for a couple more years. He and Jan bought an Airstream Design Within Reach trailer and took the cats on camping adventures. He started “Grandpa’s Chauffeur Service, “wearing a jaunty cap and cheerfully ferrying the girls to countless lessons and activities. In 2015, Keith and Jan moved to a Des Moines retirement home, 3801 Grand, where he loved his bridge group, dinner companions, and beanbag baseball teammates. Jan and Keith were married for more than 57 years until her death in 2017. After Jan’s death, Keith met Sara Weyer, who lived in Ames and was also from Perry. They moved in together and enjoyed each other’s company, especially during the isolating time of the pandemic.

Keith exuded positivity and kindness and took loving care of both Jan and later Sara. He was the consummate gentleman, always gracious and easy to converse with. Even as a nonagenarian, Keith remained incredibly sharp, embracing new technology and following current events. We will miss his warm chuckles, mischievous sense of humor, and boundless love of family.