UNI got their first win over a Power 5 program this season in their win over Vanderbilt. It was a tough gritty win for the Panthers as they battled on defense. Two Panthers ended the game in double figures while forward Grace Boffeli picked up her third double-double of the season.

“Obviously I’m extremely proud of this team,” said Head Coach Tanya Warren of the big win. “I challenged them. I wanted to see some growth from last week to this week. In terms of being able to handle a big win early and then coming back and turning to the preparation piece.

“But what I really liked is that they jumped out to a 13-point lead early. And I thought our bench did a terrific job of getting us back in the basketball game. I liked our toughness.

“We have shown that we can play in a variety of ways. Yesterday it was pace, pace, pace. Today it was more of a grind, we had to mix it up defensively and try and get them off balance. But I thought we got contributions from everybody and this is a great team win.”

The Panthers struggled early, not finding a basket for over five minutes. Guard Cailyn Morgan had the first two points for UNI with free throws at the line. But UNI tore off on an 11-0 run to make it just a two-point game. The rest of the first quarter would be back and forth with Vanderbilt up by one after 10 minutes.

The second quarter also began with very little scoring. Neither team found the net over the first two minutes. But they would trade baskets until guard Emerson Green hit a three-pointer to tie the game up for the Panthers.

The Commodores answered with three points to take the lead back, but UNI would match Vanderbilt shot for shot. The Panthers would take the lead on a Morgan layup with two minutes left in the half. The teams went back and forth to the end of the half with three-pointers from the Commodores and an and-1 from Boffeli, going into halftime tied.

It was just as tight going into the second half that began with a Maya McDermott trey. UNI extended its lead to five on a Boffeli fast break a minute and a half later. The teams would trade small runs with Vanderbilt going up by three midway in the quarter.

But freshman point guard Taryn Wharton hit her first collegiate three-pointer to tie the game. The lead would go back and forth between the two until the Commodores went up by two with a minute and a half in the third. Another shot wouldn’t be made by either team going into the final frame with a one-possession difference.

Vanderbilt would go out to a five-point lead in the first two and a half minutes of the fourth quarter. It would be their last lead that was more than a basket ahead of UNI. The Panthers retook the lead a minute later with another McDermott trey.

The Commodores would get a six-point run at the five-minute mark. But freshman forward Ryley Gobel made three points in over a minute. UNI would get the lead back on a McDermott basket off a turnover. The Panthers would go up by four on a Boffeli layup but Vanderbilt would tie the game in the final 30 seconds off two straight jump shots.

With the game tied and possession of the basketball, UNI set up Green for a three-point shot from the left side. With less than a second to go, Green let the trey fly and made the shot to give the Panthers their first win over a Power 5 team since 2019.

Boffeli led the team in points with 15 while McDermott had 10. Boffeli also helped lead the team on defense with 10 rebounds along with center Cynthia Wolf. Four different Panthers had steals with Kam Finley grabbing two.

UP NEXT:
UNI returns to action next weekend against South Dakota State. The Panthers will travel to Brookings to play the Jackrabbits who are receiving votes in both the AP Poll and the Coaches Poll next Saturday at 7 p.m. 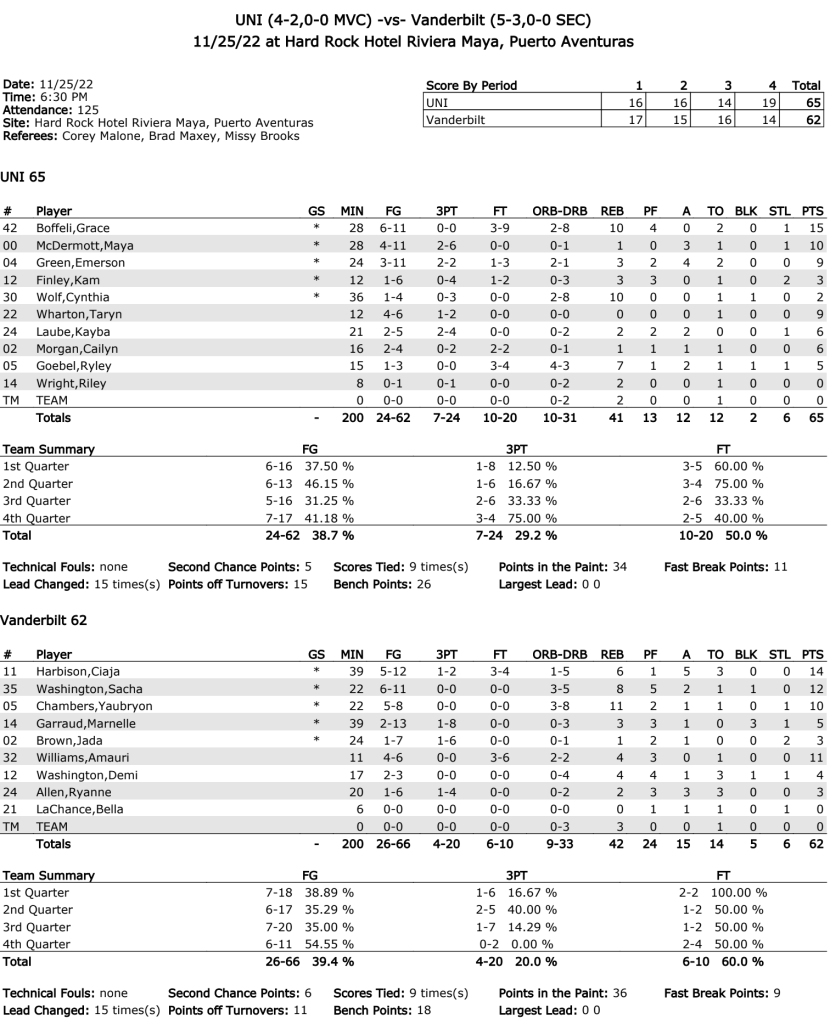