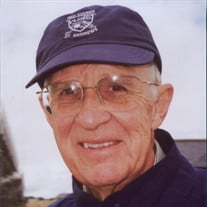 A lifelong resident of Mason City, Iowa, Thomas Marshall Waggoner was born February 6th, 1929 to Karl M. and Mildred K. Waggoner. He was raised in the Forest Park neighborhood of Mason City where he graduated from Mason City High School.

Tom attended the University of Illinois School of Architecture where he graduated with high distinction. Following his graduation Tom was proud to return to Mason City where he practiced architecture alongside his father.

He was united in marriage to Sally Judd and together they would be blessed with two children, Karl and Jean. He was a proud veteran of the United States Army where he served during the Korean War. He and Sally enjoyed traveling and experiencing the world together. He will be remembered for his caring nature and wonderful sense of humor.

He is preceded in death by his parents, Karl and Mildred; sister, Barbara (John) Starks; and brother-in-law, Roger Judd.