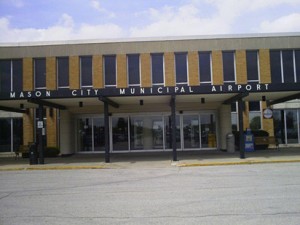 MASON CITY – The Mason City airport is still without air service and passenger numbers have plummeted, but that hasn’t stopped airport officials from spending lavishly.

Great Lakes Airlines suspended service from Mason City on January 31st, and officials have sought a carrier ever since. The United States Department of Transportation published on January 31st a Request for Proposals for Airline Service for Mason City. Those proposals were due February 21st.

At the March 10 Airport Commission meeting, proposals were to be considered, but the matter was postponed by the board until the next meeting as negotiations are proceeding.

No passengers are boarding planes at the Mason City Airport, but the dollars are flowing out as if business never slowed.

In January, the airport reported revenue was down due to decreased passenger numbers, despite an aggressive ad campaign that cost nearly $28,000 since December 2013.  Part of the ad campaign featured TV commercials with commission Brett Schoneman and North Iowa Corridor “CEO” Brent Willett.  Also recently approved by the Airport Commission was a project for the installation of nearly $17,000 worth of security cameras at the airport.  The airport is also considering a new sign at the front entrance to the airport, to cost an undetermined amount.

Despite plummeting passenger numbers, the airport recently reported that it had purchased and put into service a “high speed runway plow / broom” that cost $413,054 which was paid for by a federal grant.