MOLINE, Ill. – It was a tight contest the entire way for the UNI women’s basketball team as they came just short of the Hoops in the Heartland Championship game to Illinois State, 60-58.

A five-minute cold stretch at the end of the game would be the Panthers’ downfall in an otherwise tight contest against the Illinois State Redbirds on Sunday afternoon. UNI just barely missed the NCAA Tournament in the 58-60 loss as they led for the majority of the game. The Panthers did lead the game in assists, blocks, and free throw shooting percentage.

It’d be a slow start for UNI in the final game of the Hoops in the Heartland tournament as they wouldn’t find the basket until the six-minute mark. The 10-2 run for the Redbirds would put them on top by eight going into the media timeout. The Panthers would be a force out of the timeout as they ripped off a 9-2 run to end the quarter. Senior guard Karli Rucker would lead UNI going into the second with four points followed by senior forward Bre Gunnels with three.

The start of the second quarter wouldn’t be kind to either team as a basket wasn’t made until two and a half minutes into the frame. But the Panthers would get the first short run of the quarter, knocking down a free throw and a layup to go up by two. Illinois State would tie the game back up on their next possession but UNI responded quickly with a three-point jump shot by freshman guard Emerson Green.

Junior guard Kam Finley would follow up with a quick layup to get the Panthers up by five and force a Redbird timeout with four minutes left. Out of the timeout, Rucker would draw a foul to extend the UNI lead to seven. Two more shots at the line for freshman guard Kayba Laube would give UNI their largest lead of the game, up by nine with three minutes to go. Illinois State would rattle off a quick five-point run to close the gap to four. But two jump shots in the final minute of the game would have the Panthers up by five going into halftime.

The slow starts of the first half would disappear in the second as each team made a shot within the first minute of the third. The Redbirds would be able to have the first run of the quarter, making three baskets for six points over three and a half minutes. UNI would get themselves back on top by two with a second-chance trey from Finley. The three-ball would force a Redbirds timeout at the under-five, where they would be able to tie the game back up with a hook shot. The next two minutes would be scoreless until Green made her second three-pointer of the game with 2:33 to go in the quarter. Illinois State would score two quick baskets, but a foul in the final 30 seconds of the quarter put Rucker at the line to get the Panthers on top by one.

It was three quick back and forth shots to begin the final frame as Rucker made a jump shot and a layup in under a minute. Almost 30 seconds later, Green would make another trey to give UNI a six-point lead with eight minutes to go. Neither team would score for the next two minutes but would again go back to trading baskets for just over a minute. The Panthers’ last basket of the game would come from Finley with a second-chance layup with just over five minutes to go. UNI would go cold for the rest of the game as the Redbirds put together an 8-0 run to win the championship game 50-48.

In the third-lowest scoring MVC championship game in history, UNI went 18-55 (32.7%) from the floor, 4-19 (21.1%) from three-point range, and 8-10 (80%) from the free-throw line. The Panthers grabbed 34 boards in the loss while having 10 assists, five blocks, and one steal. An even 50% of UNI’s points in the championship game would come in the paint while the Panther bench contributed 15 points.

Senior guard Karli Rucker would be the only UNI player in double figures with 16 points on the afternoon. Freshman guard Emerson Green was one point shy of a double-digit performance with nine while junior guard Kam Finley would round out the top three in shooting with six points. Senior forward Bre Gunnels led the team in rebounds with eight while junior center Cynthia Wolf had six boards. Rucker would also add four assists to lead the Panthers.

With a 22-win season and a NET ranking of 55, the Panthers are expected to make the 68-team WNIT field. The first 64 teams in the tournament will be revealed Sunday, March 13 at 8 p.m. CT while the full bracket will be released the morning of Monday, March 14. 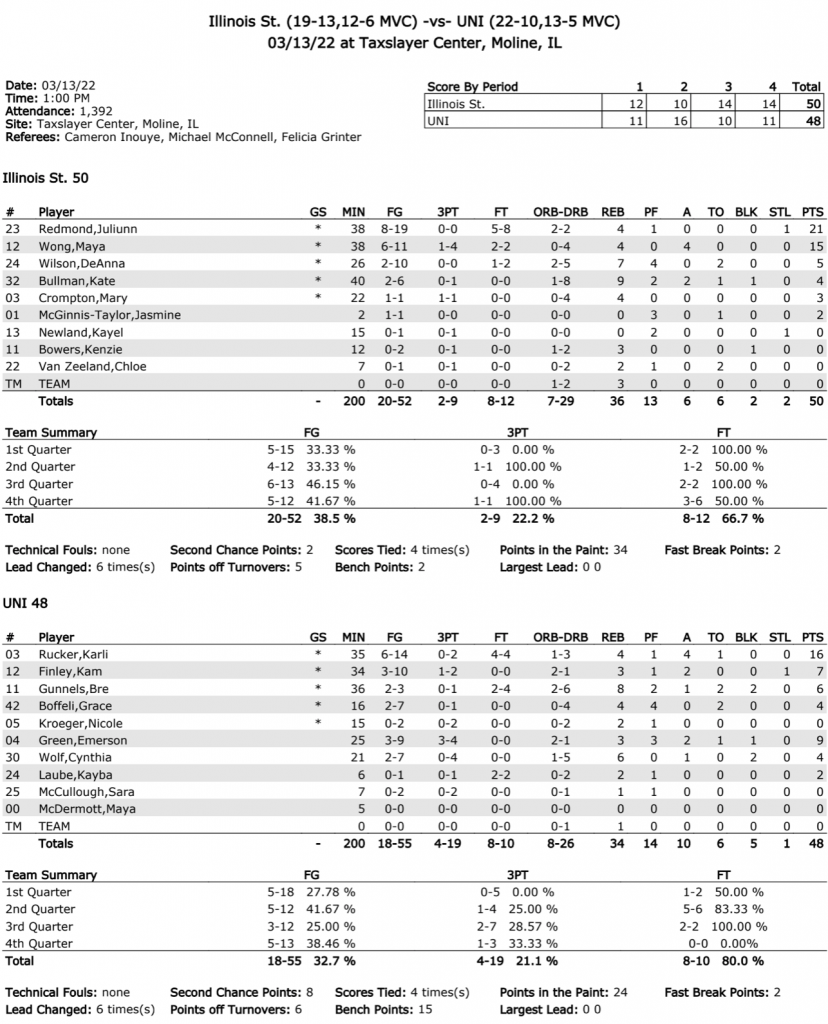