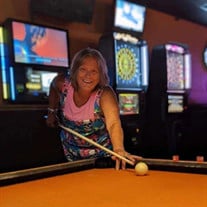 Memorial contributions may be directed to Nancy Schroeder and a charity will be established at a later date.

Kim was born April 27, 1957, daughter of Ronald and Nancy (Juhl) Schroeder in Mason City. She attended the Clear Lake High School. On May 15, 1973 she welcomed her daughter, Trisha Ann into this world. She worked numerous jobs throughout her life.

Kim was a pool enthusiast throughout her adult life. She belonged to the several different pool teams, plus entering into the 2021, State Pool Tournament in Des Moines.

Kim’s biggest joy in life was spending time with her family and friends. She loved spending time outside in her garden and she enjoyed making jewelry, and creating many fashionable pieces. Kim’s favorite holiday was Halloween and will be remembered for her decorations and for her pranks during this time.

Kim is preceded in death by her father, Ronald Schroeder and husband, Randy Johnson.