Grassley: Government must do better to follow processes to prevent gun violence

BUTLER COUNTY, IOWA – Senate Judiciary Committee Chairman Chuck Grassley is asking the Federal Bureau of Investigation and Google, Inc., which owns YouTube, to explain why warnings about threats by the man who later carried out the tragic mass-shooting at Marjory Stoneman Douglas High School in Parkland, Fla., did not result in preventative action by law enforcement. 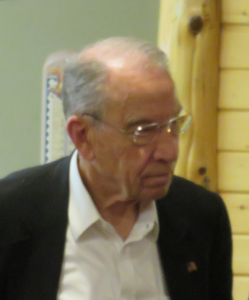 “See something, say something. That’s what the government asks of its citizens. But the government must also follow through when vigilant Americans speak up, and the government is responsible for following the laws and regulations on the books designed to prevent tragedies like the one in Parkland. Last fall in Sutherland Springs, Texas, we saw the horrible result of the government’s failure to correctly submit names to the NICS registry. And now we are witnessing what happens when federal agencies fail to follow multiple tips about a clearly disturbed and dangerous individual. The government must do better to follow these existing processes to prevent future tragedies. I hope that Director Wray will work quickly to address the breakdowns at the FBI and to cooperate fully with the Judiciary Committee’s oversight efforts. The public deserves answers and accountability so these mistakes are not repeated,” Grassley said.

According to news reports, the FBI received a tip in September about threats made in a YouTube comment, apparently by Nikolas Cruz, indicating a desire to carry out a school shooting. Though the FBI investigated the tip, it was reportedly unable to identify the actual person who posted the comment. On January 5, the FBI received another tip from a person close to Cruz warning of his violent tendencies and access to a firearm. That tip was not passed along to the appropriate field office for further investigation.

In a letter today to the FBI and Google, Grassley is seeking details on the steps taken to investigate both tips, to identify what information was available, and to explain where breakdowns occurred. Grassley’s letter to Google asks whether law enforcement requested information on the YouTube comment and whether Google maintained information that would have assisted in identifying the individual responsible for the threatening posts.

Click the following links to read the letters to the FBI and Google.

15 Responses to Grassley: Government must do better to follow processes to prevent gun violence