IOWA CITY – Iowa got back on track in Big Ten Conference play Monday night, beating Minnesota 72-52 in a home contest.

Iowa has won six of the last seven against Minnesota in Carver-Hawkeye Arena. Iowa held the Gophers to 52 points, the fewest in the series since 2007 (49).

Joe Wieskamp posted season bests in scoring (23) and 3-pointers made (5) in the winning effort. It marked the fifth time in his career that the sophomore eclipsed 20 points in a game.

Luka Garza posted his fifth double-double of the season with 21 points and 10 rebounds. Garza has topped 20 points a team-best six times this season.

Jordan Bohannon dished out a season-high 10 assists (zero turnovers), marking the seventh time in his career that the senior was credited with 10 assists or more with the last time coming versus Minnesota in Iowa City in 2017. Bohannon became the sixth Hawkeye to join the 1,000-point/500-assist club. Bohannon’s 10 assists tonight pushed him over the 500-assists milestone.

Iowa returns to action Thursday in an Iowa Corn Cy-Hawk Series against Iowa State. Tipoff is set for 7:01 p.m. (CT) at Hilton Coliseum in Ames. The game will be televised on ESPN2.

Hawks Down Gophers 72 to 52 pic.twitter.com/QrCyIyWxkA 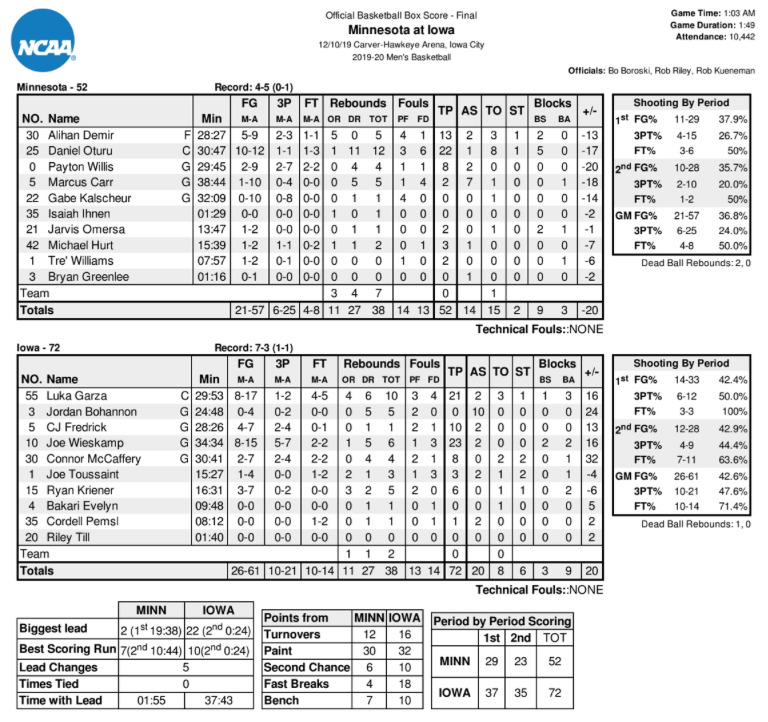 Q. How big was that four-minute stretch to start the second half just for you guys to get that lead there and kind of get off to a hot start?
FRAN MCCAFFERY: I think you always want to win the first four minutes of the second half if you can. Everybody tries to do it. We did it. That was great. And then they made the run at us, and I thought we answered that really well. I thought Wieskamp’s block and run out was huge at that point.

Q. How good is it to see him get off to a good start offensively? It seems like he was ready to go.
FRAN MCCAFFERY: He was locked in and he’s been that way. It’s interesting because he’s often evaluated on his offensive game, his defense at Syracuse, I mean, he guarded a guy and held him to 10 that got 35 in the next game on the road. And I applauded him. I said your defense — because I watched every game, and that kid is a pro, and he got 10. So the thing that was impressive to me about Joe tonight was he played that kind of defense and then he played that kind of offense. And that’s what the great ones do.

Q. Seemed like things opened up on the outside so much attention on Luka now.
FRAN MCCAFFERY: That and we got stops and were able to get some run outs. I think that was important too.

Q. What do you think the biggest difference was defensively for you guys going from 103 to 52 points allowed?
FRAN MCCAFFERY: We guarded ball screens a lot better. I thought we closed out better. We picked guys up in transition. Oturu is a handful, so you got to make a decision, are you doubling, when are you doubling, who are you doubling off of, because now you’re going to leave Willis or Kalscheur, Carr. I mean, those guys have been playing really well and they were like 3-29.

Q. Why did you bother their guards so much?
FRAN MCCAFFERY: I just think we stayed down in our stance, we stayed in the gaps, and we finished the possession, whether it be a drive and a kick or a ball screen — they run a lot of back screen, ball screen action. We switched when we were supposed to. We got over toward the ball. A couple times you’re switching and all of a sudden you got a small one on Oturu, who is really difficult to stop in there. And we doubled him and Connor got him a couple times. He was really good when he went and he wasn’t the only one and like I had said, we got him to travel a few times. That was key.

Q. It looked like C.J. was limbering up quite a bit. Where do you think his health is right now?
FRAN MCCAFFERY: I think he was pretty good. I thought he was terrific. I mean, defensively he was great. He scored 10 points, hit some big threes, a big three in the second half when we needed one. A little banged up, but he won’t complain.

Q. 20 assists on 26 baskets. That’s always a stat that coaches like to emphasize. But what does that mean?
FRAN MCCAFFERY: It means we’re looking for each other. Obviously, it starts with Garza. But if Joe gets hot, we have got to find him. C.J., we have to find him. In transition you have to find whoever is open. I thought, to a man, we really paid attention to that.

Q. You talked about a little bit before Michigan but these challenges night-in, night-out that Luka Garza is going to face, does he adjust anything based on Teske to Oturu to these other guys or did does he just play his game?
FRAN MCCAFFERY: He adjusted tonight. Early on they were physical and they were coming at him. Unlike the other night where they were physical and playing behind and staying up on the three-point shooters. So he was 3-9 and really I thought was spectacular in the second half. So he had to adjust as the game went on. He’s going to have to do that as well as adjust game to game as to how people are playing him. But the truth of the matter is, there’s not a defense that any team could possibly employ that he hasn’t already seen in his lifetime. So he’s pretty good at figuring that stuff out.