MASON CITY – A woman who operated a daycare in Mason City and sexually abused a young child in her care has been given probation for her heinous crimes.

Tawny Marie Symonds, age 31, was arrested in December of 2016 and charged with sexual abuse in the second degree, a class B felony. She was also charged with class C felony assault and class D felony child endangerment for her abuse of one child age three or younger.

These charges were brought as a result of a joint Iowa Department of Human Services investigation with the Mason City Police Department that began in February of 2016 at a residence in Mason City, where Symonds operated an in-home daycare.

The Iowa Division of Criminal Investigation also assisted in the investigation.

Mason City police told NIT “The defendant’s day care was a licensed day care. The other children were interviewed. It does not appear that there are any additional victims at this time.”

The Globe Gazette reported that “The Iowa Department of Human Services alleged in a Feb. 12 complaint that Symonds had violated a safety plan by allowing someone at her day care/residence, 696 13th St. S.E., that she had previously agreed would not be in the home.  The document does not specify who the person was or why his presence would have violated the rules. That man is not suspected of harming any children,” a police officer told the Globe.

Just prior to the charges being brought against her, Symonds wrote via social media “Friday nights at my house are weird.”

This past December, Symonds was released from jail under supervision after her defense counsel and prosecutors came to an agreement.  After a guilty plea to only child endangerment, Symonds today was sentenced to probation and a suspended jail term. 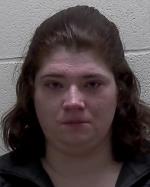