CHARLES CITY – A man who was convicted for dealing meth in Cerro Gordo county was caught by police on a warrant connected to that crime and taken to jail.

On August 10 just before midnight, Charles City police went to the 1400 block of Gilbert Street to serve a warrant out of Cerro Gordo county. There, they located 47-year-old Michael Hubka. He was arrested and taken to the Floyd county jail and later transferred to the Cerro Gordo county jail, where he remains held on $10,000.00 cash bind until a court date.

Hubka is a convicted felon out of Cerro Gordo county for delivering meth. He has remained on probation since his conviction in 2013, and had avoided prison and fines as part of his plea deal, as all that punishment was suspended. He still owes Iowa courts the entire $3,554.26 in that case, which has been sent to debt collection but unsuccessfully collected.

This past May, Hubka pleaded guilty to assault in a domestic abuse case.

On November 26, 2015, at about 3:06 PM, Charles City police responded to the 1400 block of Gilbert Street for a 911 hang up. At the scene, police discovered Hubka, who was wanted on a warrant connected to domestic assault charge brought by the Chickasaw county sheriff’s office. He was accused of a domestic assault on October 29 in that county, and had been wanted on a warrant since November 2. As a result, he was ordered to pay $895.33 in fines and court fees. 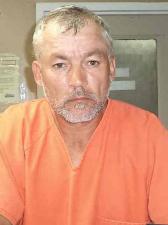