DES MOINES – U.S. Marshals joined Ames Police on Thursday in the manhunt for a Fort Dodge man who was wanted for an August 9th shooting that left one man hospitalized. The manhunt ended yesterday when a team of federal, state, and local law enforcement officers, led by U.S. Marshals, arrested the suspect in Chicago.

The U.S. Marshals Southern Iowa Fugitive Task Force joined in the manhunt for 23 year old Kevin Darnell Williams of Fort Dodge after Ames Police identified him as the suspect in the shooting of Leonard Boyd III, 29, of Boone on Tuesday. An arrest warrant was issued for Williams by the Iowa District Court for Story County on Thursday, August 11th. Williams was charged with attempted murder, first degree robbery, and being a felon in possession of a firearm.

Williams was booked into the Cook County Jail to await extradition proceedings back to Iowa.

The Southern Iowa Fugitive Task Force is a team of law enforcement officers led by U.S. Marshals in the Southern District of Iowa. The task force’s objective is to seek out and arrest violent fugitives and sexual predators. Membership agencies include the Polk County Sheriff’s Office, the Fifth Judicial District Department of Correctional Services, the Iowa Division of Criminal Investigation, the Department of Homeland Security Investigations, and the Bureau of Alcohol, Tobacco, Firearms, and Explosives.

On Tuesday, August 9, 2016, at 3:23 p.m., the Ames Police Department responded to a report of a shooting in the 3800 block of Tiverton Court. When officers arrived, they found a male laying in the road. The male had multiple gunshot wounds to his body. Witnesses told officers the suspect fled on foot into a wooded area north of Tiverton Court. Officers conducted an extensive search of the area, but were unable to locate the suspect.

The victim was transported to Iowa Methodist Medical Center in Des Moines. The victim has been identified as Leonard F. Boyd III, age 29, of Boone, Iowa. Boyd is in stable condition. Follow-up investigation by the Ames Police Department identified the suspect as Williams, also known by the name “Splash”. 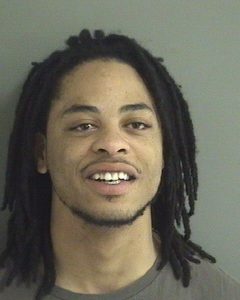