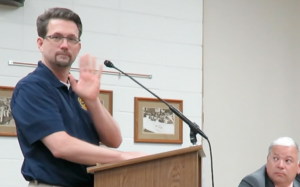 Rick Mathes delivers a sarcastic wave to NIT. He and his daddy “Dick” had been delivering stares at NIT Publisher Matt Marquardt during the meeting.

MASON CITY – An outspoken supporter of a failed slaughterhouse treated the mayor and city council to a dose of silence and a dire prediction Tuesday night.

Apparently still smarting from his failed efforts to revive the Prestage Foods pork plant, Mathes approached the podium with a smirk on his face and introduced himself. He stood there silent and grinning for well over one minute before he spoke. He managed to wave at an NIT camera during his charade. 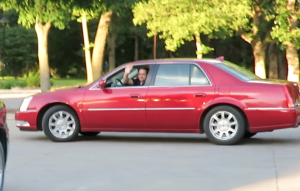 “Did that seem like a long time?” Mathes said to the mayor and council with a snide half smile. “I hope so. I was going to go 5 (minutes), but I have respect for some of the council members. That’s a good example of the economic winter you’ve set us up for.”

Dick Mathes, another landlord and father of Rick, was again at the podium as has been several times previously, lecturing about the nasty emails he claims to still receive.

After the meeting, Rick Mathes canoodled with fellow slaughterhouse supporters Brett Schoneman and Janet Solberg, laughing in the parking lot, before driving off in his candy red Cadillac.