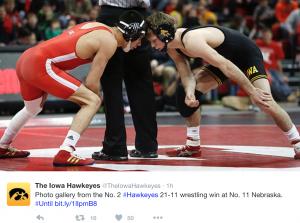 LINCOLN, NEBRASKA – The second-ranked University of Iowa wrestling team won seven of 10 matches to defeat 11th-ranked Nebraska, 21-11, on Sunday afternoon in front of a school-record crowd of 3,952 at the Devaney Sports Complex.

Iowa improved to 13-0, 7-0 in the Big Ten and extended its conference win streak to 19. Iowa has won 17 straight Big Ten road duals.

Eight of Sunday’s 10 bouts pitted one ranked wrestler against another, and Iowa came out on top in seven of those eight matches.

Iowa’s five other wins were decided by two points or less.

“We want to win every match and we want it to be lopsided,” said UI head coach Tom Brands. “We left a lot of points out here, but they’re probably thinking the same thing. Today’s dual was probably a little more exciting than I would have liked.”

Third-ranked Cory Clark (133) and 12th-ranked Alex Meyer (174) won by identical 2-0 scores. Both wrestlers escaped in the second period and rode the length of the third period to earn a point for riding time. Clark topped No. 14 Eric Montoya to post his second consecutive shutout, while Meyer defeated No. 16 Micah Barnes to improve to 4-2 against ranked opponents.

Second-ranked Brandon Sorensen won a top-five matchup for the fourth time this season. Sorensen scored a takedown in the final minute of the first period and the opening minute of the third to defeat fifth-ranked Jake Sueflohn, 6-5, at 149 pounds.

Edwin Cooper, Jr. followed with his second win in a row against a ranked opponent at 157. Cooper scored a four-point move in the opening period and held on for a 7-6 win.

The Huskers (9-4, 3-4) got on the board with decisions at 141 and 165 pounds, and won by fall at 184 pounds. Nebraska was deducted one team point following the 157-pound match for unsportsmanlike conduct.

Iowa returns to the mat Friday hosting Minnesota at 8 p.m. (CT) at Carver-Hawkeye Arena. Tickets are $15 for adults and $8 for youth 18-years and younger. UI students and children five-years and younger are admitted free. Tickets are available at the UI Ticket Office over the phone at 800-IA-HAWKS and online at hawkeyesports.com.

NOTES: Attendance was 3,952, a Nebraska home attendance record… Hawkeyes are 7-0 in the Big Ten for the sixth time under Tom Brands… Iowa’s returning All-Americans improved to 68-1… Gilman improved to 17-0… Burak has won a career-best 17 straight matches… Burak and Gilman extended their career bests winning streaks.

*Nebraska was deducted one team point following the 157-pound match