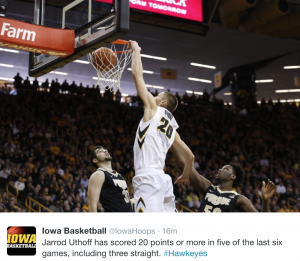 IOWA CITY – Iowa faced a tough test in its second meeting of the season against nationally-ranked Purdue, but a strong second-half led the Hawkeyes to a key 83-71 victory.

However, the second half was a different story, as the Hawkeyes wowed the sellout crowd of 15,400 with an 8-0 run to begin the final 20 minutes.

Point guard Mike Gesell said after the game that “Woodbury played tremendously today. He is a big reason we did so well.”

Woodbury finished with 13 points and 10 rebounds.

Iowa, currently is ranked #9 in the nation and next plays highly-ranked Maryland on Thursday in a road contest.  However, Maryland and several other teams ranked ahead of Iowa all lost this past week – meaning Iowa could move way up in the rankings.

“Rankings don’t mean anything to me,” Gesell said.  “It just means we are playing well. It’s great for our fans but it puts a target on our back.”

Junior forward Peter Jok credited the students with helping his team win.  “We had a ton of support tonight,” Jk said.  The student section was the loudest it has been this season. We were excited about that.”

“I think we are finally getting recognition for being a great team and we have always believed we are a great team,” star senior forward Jarrod Uthoff said after the game.

Iowa wins its 13th straight Big Ten Conference regular season game dating back to last year when it closed out the season with six straight league wins. That is the longest string of consecutive Big 10 wins at the school since the 1969-70 team won the Big 10 title going 14-0. This also marks the first time Iowa has started off the Big 10 campaign with a 7-0 mark since the 1969-70 team won the Big Ten title going 14-0. Iowa’s current 16-3 record is the best start at the school since the 1986-87 team under coach Tom Davis opened the season at 18-0. This also was Iowa 13th straight home win dating back to last year – the longest homecourt winning streak since the Hawkeyes won 20 straight home games at Carver Hawkeye Arena from 2013-2015. Iowa improved its record this season to 5-2 against ranked opponents, which includes winning the last four contests (No. 1 Michigan State, No. 14 Purdue, No.4 Michigan State, No. 22 Purdue) and is 7-3 against RPI-Top 50 teams. This marked the first time Iowa has swept the season series beating Purdue twice since the 2003-04 campaign. This was Iowa’s third straight win over Purdue in Iowa City.

The No. 9 Hawkeyes are taking on No. 22 Boilermakers inside Carver-Hawkeye Arena! pic.twitter.com/6KCFFMDBzi

Steal? Check! And-1 finish? Check! Collision with a camera guy? Check! Peter Jok does it for @IowaHoops. https://t.co/wVzy3R8bug

TIMEOUT PURDUE! Iowa opens the second half on an 8-0 run! #Hawkeyes #UNTIL

Cue the bear puns: @IowaHoops' Nicholas Baer gets his paw on a Purdue shot. https://t.co/062DNXVPcu

They call him "Biggie," and this Caleb Swanigan @BoilerBall sequence was, well, #B1G. #BTNStandout https://t.co/GGmSHqYDX3

We're ready. Are you ready? Doesn't look like there's a seat to be had at Carver-Hawkeye Arena. pic.twitter.com/ZW7iLXKMqw

Jarrod Uthoff was presented an honorary ball to commemorate his 1,000 points scored at Iowa. #Hawkeyes pic.twitter.com/1uVapY4kSc 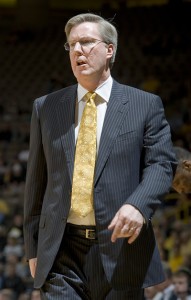 Q. Fran, that stretch right out of halftime that Uthoff had, what can you say about his play?
FRAN McCAFFERY: Well, he was playing with great confidence, has been all year. But I think what you saw was an aggressiveness that you love to see him play with. I mean, he was really attacking, and I don’t think anything he does anymore surprises anybody.

Q. Any halftime message?
FRAN McCAFFERY: No, we were pretty on point. I don’t think we were as sharp as we needed to be with our defensive game plan. We were close in the first half. We were not putting as much pressure on the ball. We were not over. We were not reacting. We gave up a couple easy hoops on out-of-bounds plays, things like that. I thought we tightened that up. We were a little more physical, and the things that concerned me there was they got the bonus early and consequently they were in the double bonus early, so that’s one of the reasons we went zone.

Q. During that I think it was 23-6 in the second half, seven different guys scored for you? What does that say?
FRAN McCAFFERY: I think that’s the beautiful thing about this team, and that’s what I said after the game. To see Nicholas Baer, Brady, and Dom Uhl do what they’re doing, we got great play from Ahmad. He didn’t score but he gave us quality minutes, especially when he got in foul trouble.

Q. Adam’s second double-double in a row, and he’s going up against some tall players.
FRAN McCAFFERY: I wanted him to play more minutes. He got his fourth, so he did that in 23 minutes. He’s just really playing well right now.

Q. Beyond the obvious impact of making three- pointers, what does it do for a team as far as on offense and just the flow of the game?
FRAN McCAFFERY: Well, a lot of our threes come off of ball movement or they come in transition. And I think that’s kind of how we like to play offensively. We want to run, we want to move the ball, and what it is an
example of is an unselfish group. Like we just said, seven different guys scored, and that means we’re sharing the ball. We’re not coming down in a situation we have to go to a certain guy to get a bucket. It’s hard to play that way, especially when you’re playing a team who’s as good as Purdue defensively.

Q. Ellingson was one of your first subs off the bench. That may be his best Big Ten game. Anything you saw in practice leading up to this game?
FRAN McCAFFERY: He’s rock solid in practice. He’s very consistent. I haven’t given him as many minutes. He got more minutes today. He got eight points in 11 minutes; pretty good. I only played him two minutes at Rutgers, I think and maybe three the game before. Tried to give Christian a shot last game.
He never loses his confidence, and he’s rock solid. No mistakes, just — I’m really happy for him.

Q. Your post defense was tremendous tonight, especially when you consider that Woodbury outscored and out-rebounded both Haas and Hammons combined. How in tune were they with the game plan?
FRAN McCAFFERY: They were really in tune. I thought Woody and Dom and Ahmad were all really good. The problem you have sometimes is you don’t get the help that you need, especially when they make six threes in the first half. It spreads you out a little bit, and that’s the danger, because you want ball pressure front, weak side help. Those guys are so big, because if you keep letting them catch it, they’ll be in the double bonus early in both halves and everybody will be in foul trouble.

Q. Is Adam Woodbury one of the toughest players you’ve ever coached?
FRAN McCAFFERY: Yeah, he has been since the day he got here. That’s what he’s always been. That’s why I love him. I think over the years you can see the development in his game due to the experience, just being out there and playing against really good players every night. I mean, he was special today, Adam Woodbury.

Q. Right now you guys are 7-0, best start you’ve had as a program in 46 years or whatever it is.
Probably going to be ranked near the top five tomorrow. You haven’t had a problem with keeping them grounded, but what’s the message going forward? Does it change or does it stay the same? FRAN McCAFFERY: The message will never change, but I think if we all look at it pragmatically, we go on the road to play Maryland on Thursday. That in and of itself is going to keep you grounded. I mean, they’re incredibly talented. They’re having a great year. It’s a terrific venue to play in. I’ve coached there. And I’ve got a lot of respect for Coach Turgeon and the job that he’s done. We’ve got our hands full. Like we always say, enjoy this today. Tomorrow we’ll go to work.

Q. Certainly Purdue is a Big Ten title contender. What does it mean to sweep Michigan State and Purdue?
FRAN McCAFFERY: Well, I think it’s great in the sense that it speaks to the quality of what I think our team is, but I always felt that. But you can’t look back because look who’s coming. We’ve got Indiana twice, we’ve got Maryland. Northwestern, excellent team. Penn State, much better. We’ve got at Ohio State, I mean, right on down the line, Minnesota. They’re this close. Wisconsin is playing really well.

Q. What do you think of your defense right now, especially in the second half?
FRAN McCAFFERY: Defense was really good today. It was not what it needs to be for 40 minutes. Luckily it was good when it needed to be, and we turned that into offense, 23-6 run, 11 threes, so that’s great. But I’d like to see it be even more consistent for 40 minutes.