Hillary to be back in Mason City

This news story was published on December 11, 2015.
Advertise on NIT • Subscribe to NIT 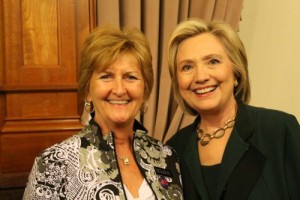 “I had the pleasure to meet with presidential candidate Hillary Clinton on Wednesday, April 15th,” Rep. Steckman said previously. She says Clinton is coming back to Mason City.

MASON CITY – Democratic Presidential frontrunner Hillary Clinton will be back in Mason City next week.

Iowa Representative Sharon Wille Steckman reported Friday evening “Hot off the phone….Hillary Clinton will be in Mason City next Wednesday at the North Iowa Events Center.”

Her campaign will host a town hall meeting at 5:45 PM Wednesday. The event will take place at the North Iowa Events Center, located at 3700 4th Street SW.

This is Clinton’s second visit to the Mason City area this year. In May, she snuck into town to meet at a wealthy couple’s house behind an abandoned KMArt with little publicity beforehand. Later this summer, she was at the Democtratic Wing Ding held at the Surf. 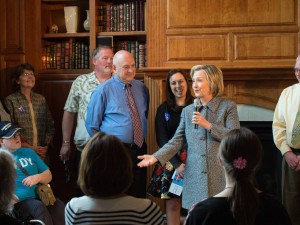 14 Responses to Hillary to be back in Mason City