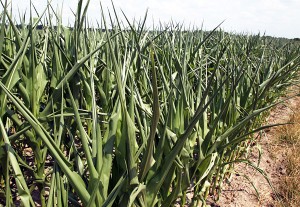 “Fieldwork and planting slowed with the cool wet weather that was seen last week, but will likely begin in earnest with several days of warm, dry weather forecast for the week ahead,” Northey said.

The weekly report is also available on the Iowa Department of Agriculture and Land Stewardship’s website at www.IowaAgriculture.gov or on USDA’s site at www.nass.usda.gov/ia. The report summary follows here:

Rain events and cool weather slowed planting in Iowa during the week ending April 26, 2015, according to the USDA, National Agricultural Statistics Service. Statewide there were 2.7 days suitable for fieldwork. Activities for the week included manure hauling, tillage, anhydrous application, and limited planting.

Pasture condition improved to 56 percent good to excellent. Pastures continued to green up, though cool weather has slowed growth. Cattle and hog conditions were reported as good. Poultry producers were concerned with the recent outbreak of avian influenza.

The past reporting week brought unseasonably cool weather throughout the week with the exception of far northwest Iowa where temperatures climbed above normal on Friday (24th). Freezes were widespread on Wednesday (22nd) and Thursday (23rd) mornings with scattered freezes on Tuesday (21st) and Saturday (25th) mornings. Temperatures fell as low as 23 degrees at Sibley on Wednesday morning, 22 degrees at Cresco, Decorah and Elkader on Thursday morning and 24 degrees at Elkader on Saturday morning. A hard freeze occurred as far south as the Missouri border on Thursday morning in valley bottom locations. On the other extreme, Friday afternoon temperatures reached 76 degrees at Hawarden and Sioux City. Temperatures for the week as a whole averaged from two degrees below normal over the far northwest to eight degrees below normal across the northeast one-third of Iowa. The statewide average temperature for the week was 6.2 degrees below normal. Meanwhile, there was some light rain across northeast and east central Iowa on Monday (20th) morning and also on Tuesday over parts of southwest and south central Iowa. However, nearly all of the week’s rain fell between Friday morning and Saturday morning with greatest amounts across the southern one-half of the state. Weekly rain totals varied from just a trace at Cherokee, Rock Rapids and Sheldon to 1.61 inches at Camanche (Clinton Co.). The state wide average precipitation was 0.54 inches while normal for the week is 0.93 inches. Soil temperatures at the four inch depth were averaging near fifty degrees as of Sunday (26th).