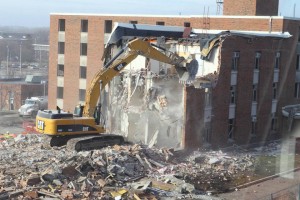 Baker Hall on the campus of the University of Northern Iowa comes down. Photo from UNI Facebook page.

CEDAR FALLS – A storied residence hall on the campus of the University of Northern Iowa in Cedar Falls was demolished over the past week.

The university reported that earlier this year, Baker Hall closed its doors for the final time after 78 years on campus. This week, the former residence hall and faculty office building is being demolished. The residence hall was built in three phases, in 1936, 1938, and 1956.

“It’s always sad to lose an old building,” the university reported, “but Baker had mold issues and bug problems, and the hallways were too narrow for it to be a candidate for renovation (both hallway walls were load-bearing, so the hallway couldn’t be widened). In the end, the best alternative was to remodel Bartlett and tear down Baker.”

All of the faculty and department offices in Baker Hall have been relocated to the renovated Bartlett Hall.

According to state documents, several options were considered for the structure, but there were too many problems associated with the building to keep it.  However, the university reported that “some nice elements of the building have been given new life”.  For example, an “Art Deco Baker sign will go to the library, and some marble was reused in Bartlett Hall and some is going to the art department for their use”

The space occupied by Baker will become green space when demolition is complete.