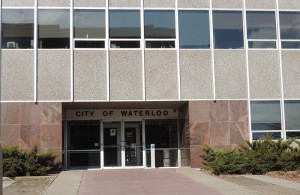 WATERLOO – A man was shot in a Waterloo parking lot this week, and police are searching for clues as to the shooter’s identity.

Waterloo police said that on Thursday March 27th, 2014, at approximately 9:15 PM, officers were dispatched to the parking lot of the Veridian Credit Union located at 1616 LaFayette St., on a report of a shooting and possible robbery.

Upon arrival, officers located a 56-year-old male victim in the parking lot, who appeared to have suffered a single gunshot wound. The victim’s identification is not available at this time pending notifications. Waterloo Fire Rescue transported the victim to an area hospital where he is being treated for his injuries.

Anyone with information about this crime is asked to contact the Waterloo Police Department or Cedar Valley Crimestoppers. While it is believed to be an isolated incident at this time, the Waterloo police department wants to remind area residents to be vigilant and aware of their surroundings when in unfamiliar areas.