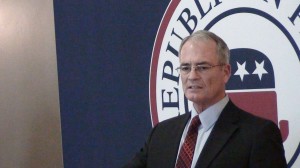 DES MOINES – Today the Republican Party of Iowa’s State Central Committee unanimously elected Danny Carroll as Chairman. Carroll fills the vacancy left by outgoing Chairman A.J. Spiker is stepping down. Carroll has a long history of serving the Republican Party of Iowa, including being elected multiple times to office. Carroll was elected county supervisor of Poweshiek county in 1984 and served 10 years. He was elected to the Iowa House of Representatives in 1994 and served through 2006, representing portions of Poweshiek, Jasper, Marshall and Mahaska county.

“I was honored to receive the unanimous support of the State Central Committee during the election for a new Chairman. Political campaigns are hard work. It’s time now for Republicans to get down to business and star knocking on doors, putting up signs, raising money and helping our candidates win in November. I know I speak for all the members of the State Central Committee when I say we are ready to unite as Republicans in 2014.”