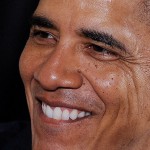 WASHINGTON, May 19 (UPI) — A stormy week for President Barack Obama did not seem to do any serious damage to his popularity among U.S. voters, a CNN poll released Sunday concluded.

“That two-point difference is well within the poll’s sampling error, so it is a mistake to characterize it as a gain for the president,” CNN Polling Director Keating Holland said in a statement. “Nonetheless, an approval rating that has not dropped and remains over 50 percent will probably be taken as good news by Democrats after the events of the last week.”

The survey found 45 percent of the U.S. public disapproved of Obama’s job performance. CNN noted the public was not dismissing the brewing controversies that roiled Washington last week.

Holland said 55 percent of the public considered the Libyan consulate and IRS incidents very important, while 53 percent felt the same way about the Justice Department probe of The Associated Press.

“More Republicans than Democrats or Independents say these three issues are very important to the nation, but even among Democrats, nearly half say the matters are very serious,” Holland said.

The poll surveyed 923 adults nationwide by telephone, and has a sampling error of 3 percentage points.