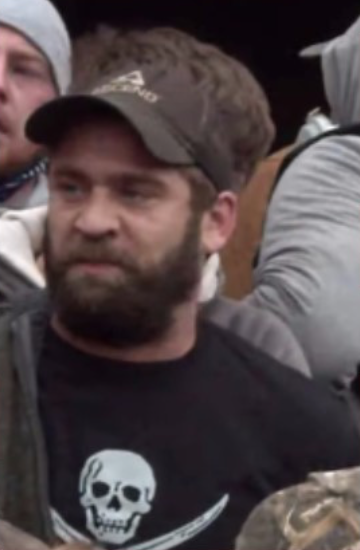 WASHINGTON, D.C. - Attorney General Merrick Garland and the Justice Department continue to pursue traitorous Capitol insurrectionists who caused the death of police and widespread destruction and chaos on January 6, 2021, led by Donald Trump.

WASHINGTON, D.C. – Attorney General Merrick Garland and the Justice Department continue to pursue traitorous Capitol insurrectionists who caused the death of police and widespread destruction and chaos on January 6, 2021, led by Donald Trump.

Friday, Jan. 6, 2023, will mark 24 months since the attack on the U.S. Capitol that disrupted a joint session of the U.S. Congress in the process of affirming the presidential election results.

(Photo: Kyle Young of Iowa at the Capitol riot, prosecuted for his deeds.)

Under the continued leadership of the Justice Department, the U.S. Attorney’s Office for the District of Columbia and the FBI’s Washington Field Office, the investigation and prosecution of those responsible for the attack continues to move forward at an unprecedented speed and scale.

Attorney General Merrick B. Garland made the following statement:

“Two years ago, the United States Capitol was attacked as lawmakers met to affirm the results of a presidential election. Perpetrators attacked police officers, targeted and assaulted members of the media, and interfered with a fundamental element of our democracy: the peaceful transfer of power from one administration to the next.

“Since then, countless agents, investigators, prosecutors, analysts, and others across the Justice Department have participated in one of the largest, most complex, and most resource-intensive investigations in our history. I am extremely grateful for the dedication, professionalism, and integrity with which they have done this work. This investigation has resulted in the arrest of more than 950 defendants for their alleged roles in the attack. We have secured convictions for a wide range of criminal conduct on January 6 as well as in the days and weeks leading up to the attack. Our work is far from over.

“We will never forget the sacrifice of the law enforcement officers who defended the members of Congress and others inside the Capitol that day. And we will never forget the five officers who responded selflessly on January 6 and who have since lost their lives: Officer Brian Sicknick, Officer Howard Liebengood, Officer Jeffrey Smith, Officer Gunther Hashida, and Officer Kyle DeFreytag.

Arrests made: More than 950 defendants have been arrested in nearly all 50 states and the District of Columbia. (This includes those charged in both District and Superior Court).