Steve King on looming election: “I have a target on my back” 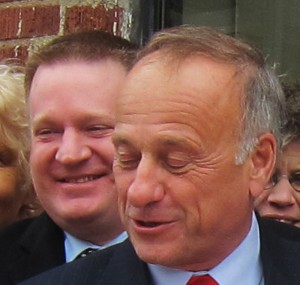 Steve King in Mason City with his friends

WASHINGTON – In a fundraising letter sent Friday afternoon, Congressman Steve King of Iowa said he needs your money to battle “liberal groups” who are “ready to go negative and flood Iowa’s airwaves if we don’t have a strong fundraising quarter”.

King said that if his campaign reaches its fundraising goal “by Monday, March 31st, radical liberal groups will be afraid to attack.”  He asked for donations of $25 “or even $100”.

King said “I have a target on my back” because “I have taken a principled, conservative stance against amnesty for illegal immigrants.

King once referred to undocumented immigrants as people that weigh “130 pounds and they’ve got calves the size of cantaloupes because they’re hauling 75 pounds of marijuana across the desert.”  King also compared those people to dogs, and suggested America had the “pick of the litter” when it comes to immigrants.

Stoking fears in right-wing Republicans of a liberal takeover, king said that “Nancy Pelosi, Harry Reid, and Obama will do or say anything to defeat me in November. Without Constitutional Conservatives in the House of Representatives, the Senate and White House will steamroll progressive immigration legislation that will forever change this great country.  We cannot allow legislation that started as a bad idea to pass as a bad law.”

The 4th Congressional District of Iowa will hold an election for the U.S. House of Representatives on November 4, 2014. Democrat Jim Mowrer, a former soldier who worked in the Pentagon and served in Iraq, has challenged King in the upcoming election. Mowrer, who announced he would be a candidate in July of 2013, now lives in Boone.  Reports have surfaced that he is out-raising King on the campaign trail. The Sioux City Journal reported that Mowrer raised $175,362 during the months of October through December, compared with $162,850 for King during that quarter.