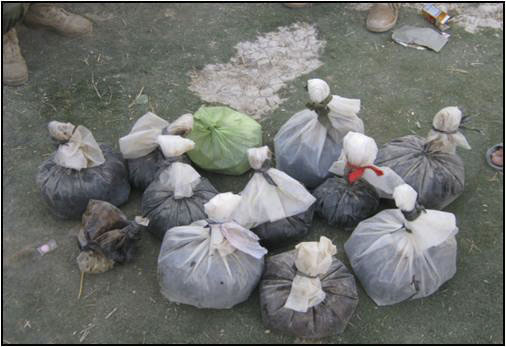 The commandos carried out concurrent operations north of the Helmand River in Musa Qaleh, Kajaki, and Sangin districts from Sept. 6-9. Meanwhile, Afghan soldiers from the 215th Corps, Afghan Local Police and Afghan Uniformed Police staged to execute clearing operations in Sangin under the command of Maj. Gen. Malouk.

Afghan commandos repelled a steady wave of insurgent attacks throughout the operation. Insurgent groups attacked the commandos with machine gun fire, shoulder-fired rockets and mortars while other insurgents fled the commandos’ advance.

The commandos found and destroyed several caches consisting of 30 50-kilogram bags of explosive material and 18 kilograms of unprocessed opium as well as antennas and radio batteries used with communications equipment.

The unprocessed opium is worth an estimated $90,000 if processed as heroin, according to a United Nations Drugs and Crime report released in May. Insurgents fund much of their operations with drug money.

The two suspected insurgents detained during the operation are believed to be connected to 16 bombings and attempted bombings in the area.

The commandos detained the suspects based on information gathered by Afghan Security Forces in Helmand and Kandahar, which is a significant achievement in itself. Until recently such responsibility fell solely on U.S. coalition forces in the area.
The combined operation was one of the largest Afghan-led security operations in the province, demonstrating the ability of the Government of the Islamic Republic of Afghanistan to deny insurgent freedom of movement and bring security to the populace.