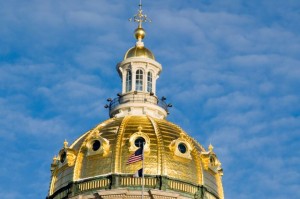 “150,000 Iowans in need are one step closer to having health insurance, something important to everyone’s piece of mind,” said Senate President Pam Jochum of Dubuque, the chair of the subcommittee. “We’ve got to stop sending people to the hospital for treatment after they’ve become so sick they can’t take it anymore. That approach is inhumane and helps make U.S. health care the most expensive in the world.”

Iowa Governor Terry Branstad continues to oppose Medicaid expansion, making him one of a declining number of Republican governors continuing to hold that position. Yesterday Governor Rick Scott of Florida said, “While the federal government is committed to paying 100 percent of the cost of new people in Medicaid, I cannot, in good conscience, deny the uninsured access to care.”

Governor Branstad plans to talk about these issues tomorrow in Washington, D.C., with Kathleen Sebelius, the U.S. Secretary of Health and Human Services. He is seeking special permission to continue the IowaCare program.

“Iowa Care costs the state of Iowa more, covers fewer Iowans, and provides fewer services than Medicaid expansion,” said Senator Jack Hatch of Des Moines, a member of the subcommittee. “It is time to end the partisan fighting and listen to the overwhelming majority of Iowans involved in health care. Expanding Medicaid will go a long way towards the Governor’s goal of making Iowa the healthiest state in the nation.”

A full committee vote is expected to be held next Wednesday, February 27th, at 2:00 pm in Room 22.