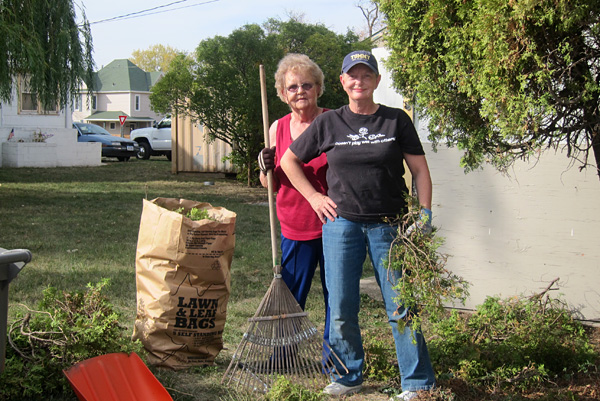 MASON CITY – Ruby Kopps still loves her home, even if she feels a little boxed in these days.

Ruby lives on South Washington Avenue, right behind the expanding Harley Davidson dealership.  You might have seen her son, Rick Kopps, from Denver, Iowa, speak at a couple of recent city council meetings in Mason City.

Ruby was in the extreme south east corner of her back yard on Sunday afternoon with her daughter, Kathy Franklin of Mason City, raking the ground and primping the bushes.

“We just carry on,” Ruby said, “even with all this activity going on, I still live here.”

I asked her about City Hall giving away the alley she shares with the Harley dealership.

“Oh, that’s a done deal.  They use it a lot.  Their delivery trucks block it all the time so I couldn’t get my garbage picked up.  They were nice enough to let me throw it all in their dumpster back here,” Ruby said, pointing to several dumpsters parked right up to her south property line.

I asked Ruby how much communication she has had with City Hall over the alley deal.

“Not so much as a peep.  Not one letter, not one phone call, not a knock on the door,” she said, shaking her head, as Kathy nodded in agreement.

“I would have expected something from them,” Kathy said.  “Seems like the deal (for the alley) got done without talking to us.  They could have at least called.”

Ruby’s home is the last house on the block; Harley owns everything else.  Asked if she plans to stay, Kathy said the house has been in the family for years and years, but that “the lawyers are handling all that.  There’s been a low offer, one we wouldn’t accept.  But we’d be open to selling if the price is right.”

As Harley installs new parking lots and the City Council prepares to vote on Tuesday night on final reading to give away the alley, Ruby plans to go on as usual at her home.

“This is my home, and I like it here,” Ruby said, stuffing leaves into a lawn bag.