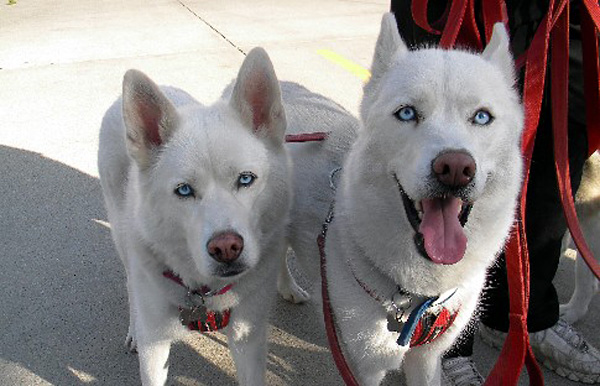 “They get walked twice a day. In the morning we walk on the nature trails of Lime Creek and in the afternoon we walk around Mason City,” said Dave.

Dave said the walking also benefits him and his wife, Kim, by keeping them in shape, “We get our exercise, too,” he says with a smile.

“They all get along, as long as they follow the boss. That’s Gracie,” Dave explains. Gracie is the leader of the pack, as they say.

They like going for walks and bringing smiles to the people they meet. “We get stopped a lot, they sit and and just take in the attention.”

“They are from three different litters, but from the same parents. All but one.” Dave told of how Dakota, would escape from her original owners, come over to his place. Finally they decided to give Dakota to Dave and Kim. “We decided to take her in.”

As far as sleeping arrangements, “Some sleep in kennels, some in beds and some on the furniture. They live and share the house with their kitty friends,” said Dave, who said they also have three cats.

Gracie and Geneva, both seven years old, Isabella, six years old, Zoey and Lilly, twin white Huskies are five years old and Dakota’s age is unknown, along with the kitties, Dave and Kim all live together, “They are our Family.”