Coca-Cola’s Freestyle fountain is all about variety 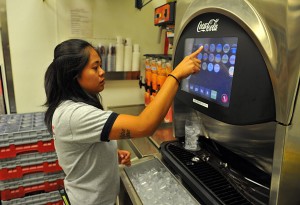 By Leon Stafford, The Atlanta Journal-Constitution –

ATLANTA — Coca-Cola’s Freestyle fountain dispenser, which the company launched three years ago, is one of its biggest innovations in years, and many say the machine is a potential game-changer in the ultra-competitive beverage industry.

Dispensing combinations of more than 120 of the company’s brands from a touch screen — including Coke Zero, Fanta, Pibb and Dasani — the machines are being credited with driving double-digit sales for many of the restaurant chains that have adopted it.

(PHOTO: Junabelle Devega, a server at the Sandy Springs, Georgia Taco Mac uses the Coca-Cola Freestyle drink machine during the dinner rush, July 17, 2012. The machine, operated by touch screen, allows the users more than 100 drink flavors and combinations. The machines have become common is some fast food restaurants.)

Despite some anxiety about the reliability of computers and the added costs that come with more choices, the device has been so successful that competitors may soon come up with their own versions.

“It’s giving consumers the ultimate option — beverage choices that they can customize themselves,” said Joe Pawlak, vice president of Technomic, a Chicago-based food research consultant. “It’s also driving up food sales by luring in customers who are there just to use the machines.”

But it comes at a cost. Traditionally, retailers are given the fountain equipment for free or through some other arrangement, including leases or as a loan from a bottler. For Freestyle, retailers pay a program fee that covers the equipment, installation, service, upgrades and the wireless data connection. Coca-Cola declined to disclose the fee amount.

The concentrate that makes the drinks also is more expensive than it is for traditional devices. Operators of several of the chains that offer the machines said they raised drink prices on average by 10 cents to cover costs.

Because of the increased choices, retailers also are buying more concentrate to accommodate consumers who are trying — and sometimes dumping down the drain — the expansive drink selection.

Technology is also a concern, at least at first, for some retailers. The machines are computer-operated, making them susceptible to freezing, crashing or breaking down. Unlike traditional fountain dispensers, which use air pressure to send the soda from plastic bags when customers squeeze or push a lever, a computer sends the drink choice to cartridges stored in the machine.

Coca-Cola said that so far, it has not seen a lot of problems, and that the company has a team of technicians at the ready to fix whatever glitches occur. Many of the problems also can be resolved via updates sent to the machines directly from Coca-Cola, which is connected to all the devices.

There’s also a learning curve for customers wishing to use Freestyle. Consumers generally need guidance when the machine is first installed, which can create long lines as they become acquainted with the choices, restaurant operators say.

“What often happens is people watch each other and learn how to use it,” said Don Fox, the chief executive officer for Firehouse Subs. “But after the first 60 days it works itself out.” Coca-Cola says 97 percent of its customers that have tried Freestyle continue to use it or have added more machines. About 7,200 machines are in operation in 4,500 locations, including Burger King, Five Guys Burgers and Fries, and Noodles & Co., said Susan Stribling, a Coca-Cola spokeswoman.

Freestyle’s success is critical for Atlanta-based Coca-Cola. North American sales of its carbonated beverages — its biggest moneymaker — have been declining since their peak in the 1990s. Teas, water, juices and energy drinks have picked up some of the slack, but they don’t have the same volume as the company’s soft drinks.

The machines, which also are in movie theaters and corporate cafeterias, could lure back customers the company has lost or introduce them and others to drinks not available on the market because of limited space on shelves at grocery and convenience stores.

And the restaurant fountain business, which uses most of the Freestyle machines, has been extremely competitive over the past year. In May, longtime rival PepsiCo ousted Coca-Cola as the exclusive provider of non-alcoholic beverages at IHOP and Applebee’s restaurants. A month earlier, Coca-Cola replaced PepsiCo products at Dunkin’ Donuts and Baskin-Robbins. Papa John’s Pizza announced in November that it was ending its exclusive 25-year relationship with Coca-Cola, and it started serving PepsiCo beverages in U.S. stores in January.

With that competition in mind, PepsiCo is said to be working on a version of its own that might up the ante by including coffee and smoothies, options Freestyle currently does not offer.

PepsiCo spokeswoman Gina Anderson said in an emailed statement that innovation is key to its “long-term success.”

“It’s what enables us to continually meet our customers’ and consumers’ desires for great-tasting, convenient products, unique packaging and differentiated equipment,” Anderson said. “It’s no secret that as part of PepsiCo’s innovation pipeline we have been hard at work on the development of new fountain equipment; and we plan to share more details about it in the future.” Under current conditions, experts say Freestyle could tip the balance in Coca-Cola’s favor if the company can demonstrate sales improvements to retailers, especially those looking to differentiate themselves from competitors, such as Atlanta-based Moe’s Southwest Grill.

After testing the machines for two months in its four company-owned stores, Moe’s expanded Freestyle to locations in Atlanta, Jacksonville, Orlando, Raleigh and Tampa. Half the stores in those cities got a machine, the others didn’t. Those who did saw comparable sales jump 9 percent, Moe’s President Paul Damico said.

“We have a lot of water-only customers who come in and just ask for a cup,” said Damico, adding that the chain would eventually offer the machines to all stores and has mandated them for new franchises.

“We were successful in converting 11 percent of those customers over to Freestyle.” Coca-Cola plans to expand beyond chains and offer the machines to independent restaurants and mom-and-pop operations in the coming months, said Jennifer Mann, vice president and general manager of Coca-Cola Freestyle. Coca-Cola also is testing the ability of customers to interface with the machines through mobile phones and has an app that helps them locate the nearest Freestyle device.

But the company is not stopping there. Because the machine can download how much of a particular drink is being dispensed at any given time, it could let Coca-Cola know whether there is a drink that needs to be offered in bottles and cans in grocery stores.

“We will certainly have the ability to bring a new brand to store because of the data collected,” Mann said.

Most of the early adopters said they took the plunge to separate themselves from competitors. While Coca-Cola is adding retailers at a brisk clip, Freestyle’s footprint remains tiny compared with the thousands of outlets it could be in.

Some were initially reluctant.

When Coca-Cola pitched Freestyle to leaders at Taco Mac more than two years ago, Fred Crudder, the restaurateur’s beverage director, was skeptical.

While the machine sounded intriguing, he worried about relying on computers and the impact the machines could have on wait staff. Taco Mac, which is based in Atlanta, is one of a handful of sit-down restaurants using Freestyle. Instead of customers making their own drinks, they order the different combinations, which wait staff supply by using the machine in the kitchen.

Initially, Taco Mac gave customers a large menu containing all the Freestyle choices. That was later stopped, to cut down on the numerous trips some wait staff were making for customers experimenting with combinations — say Coke Zero Grape mixed with Minute Maid Cherry Lemonade and diet Barq’s Vanilla — only to send it back or ask for another.

But using the machines overall has been a breeze, he said.

“When we first brought the machines in, there were moans and groans that this is going to put everybody behind,” Crudder said. “That did not happen.” Taco Mac is also piloting a test for Coca-Cola mixing Freestyle choices with drinks such as rum, vodka, tequila and Jack Daniels.

In addition to increased drink sales, many operators report takeout business shifting in-store because of Freestyle. That’s significant because consumers tend to add items to their order the longer they stay in a store.

Part of Freestyle’s appeal, they said, is the diet or caffeine-free products that aren’t in stores. That has attracted families trying to give kids less calorie-laden or sugary drinks than typically offered, said Shawn Hooks, an area representative for Firehouse and a franchisee of one of the chain’s stores.

“We have had people come in the store asking for a miniature Freestyle machine,” she said. “That’s how popular it is.”