Despite its best, US 4 x 100 relay can’t reach Bolt status 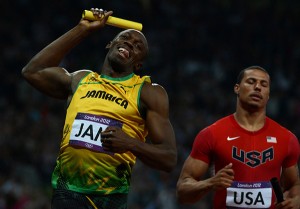 LONDON — By their own troubling admission, the primary goal of the U.S. men’s 4 x 100-meter relay team Saturday wasn’t the gold medal.

“I can sleep tonight,” said Jon Drummond, who serves as the U.S. team’s relays coach. “They did what they came to do, and that’s get the stick around.”

(PHOTO: Jamaica’s Usain Bolt celebrates victory just in front of the USA’s Ryan Bailey in the men’s 4×100 relay finals at the Summer Olympics on Saturday, August 11, 2012, in London, England.)

Aim low, and that’s usually all you’ll get.

But let’s not kid ourselves here. The U.S. relay foursome of, in order, Trell Kimmons, Justin Gatlin, Tyson Gay and Ryan Bailey raced the one lap Saturday night in 37.04 seconds.

On any other night:

They would have won the Olympic gold medal.

They would have broken the world record.

Except Jamaica’s Usain Bolt took over this Olympics seven days ago.

He runs. He breaks records. He demolishes the field. He collects the gold.

When Bolt runs, everybody else is just the undercard — including the U.S. women’s 4 x 400-meter relay team, anchored by Sanya Richards-Ross, which strolled to victory in its race Saturday by more than three seconds.

“They made it too easy for me,” said Richards-Ross, who took the baton all alone and then cruised to the gold medal in 3:16.87.

Some 35 minutes later, Bolt anchored the Jamaican relay team to victory in the 4 x 100, setting a world record of 36.84 seconds in the process.

It quickly became one of the night’s footnotes.

On Saturday, during his 4 x 100 relay victory lap, Bolt paused long enough to coax the crowd of 80,000 into starting the Wave.

“I like to push the bar,” Bolt said later. “I like to do things that no one has done before.

“That’s why I love to mess around and change the game.”

If there was a consolation for the U.S. team Saturday, it was that it made Bolt wait until after the race before he started clowning around.

Even Bolt, however, with his three gold medals at this Olympics, understands that it’s all fleeting.

“People are important,” he offered. “But first comes the gold medals.

“That’s why they love you.”

The Jamaica victory extended the U.S. losing streak in the 4 x 100 to 12 years, spanning three Olympics.

At least they can’t blame this one on TCU ex Doc Patton. He ran legs on the relay team only in the preliminary rounds.

If there was one leg Saturday, however, that swung the outcome, it appeared to be the third leg, where Gay was run down from behind by Jamaica’s Yohan Blake.

Instead of having even the one-step advantage on Bolt that they felt they needed to have, Bailey was no better than even with Bolt as they came out of the exchange zone. And there was no way that anyone Saturday was going to catch Usain Bolt.

It’s the golden rule — he who has the gold rules — and nobody has more gold in track and field this fortnight than Bolt.

When asked about the gap between the U.S. and Jamaican sprinters, one of the victors said on TV, “They have a lot of work to do.”

The comment appeared to miff the Americans, but as Gay said, “It is what it is. They’ve got a tough team.”

A week ago, after being bumped off the medals podium in the 100 meters, Gay was heartbroken. He had never won an Olympic medal before.

But after Saturday’s silver medal finish, Gay said, “That spot in my heart that was missing — I think I filled it.”

In the process, the U.S. squad ran the fastest second-place relay finish in history.

“The coaches told us it would be tough,” Gay said,. “and that it would be pretty even throughout each leg.

“We thought we could hold off Bolt, but he was tough.”

A slow exchange in 2004 in Athens and a dropped baton four years ago in Beijing conspired to launch the current winless U.S. sprint relay streak.

When Bolt runs, as he proved at these Games, there indeed isn’t much that anyone can do about it.

Bolt was asked after the race whether he finally had met the qualifications for being a “living legend.” No less than the president of the IOC, Jacques Rogge, said last week that Bolt hadn’t.

“What else do I have to do to prove myself as a legend?” Bolt asked Saturday. “Next time you see (Rogge), you should ask him what Usain needs to do, because I think I’ve done it already.”

He ran. He broke records. He demoralized his competition.

Usain Bolt took over these Games a week ago and shot an arrow right through its heart.