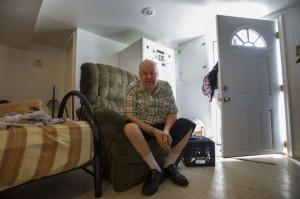 By Hanah Cho, The Baltimore Sun –

BALTIMORE — Norman Harvel is growing old under a mountain of debt.

At 60, Harvel faces medical and credit card bills topping $80,000. Yet Harvel is unable to work, having been injured at a job site more a decade ago. The former building maintenance worker now lives on $904 a month in Social Security disability benefits.

(PHOTO: Norman Harvel faces mounting debt accrued from medical procedures and medicines for him and his late wife and he is considering filing bankruptcy. )

“I was so sick and tired of getting the bills, so I would throw them away,” Harvel said from his tiny basement apartment in Dundalk, Md. “I’ve had to try to tell myself that it’s something I will wake up from.”

Across the country, baby boomers and other older Americans are drowning in debt, say credit counselors, elder law attorneys and economists.

“It’s supposed to be the golden years, but it’s not, at least financially,” said Nicholas Del Pizzo III, a Dundalk attorney whose clients include many financially struggling seniors seeking bankruptcy help.

From 1992 to 2007, the percentage of households of people in their mid-50s and older with housing and consumer debt rose from 53.8 percent to 63 percent, according to the Washington-based Employee Benefit Research Institute’s research using government data. The problem is even more acute for those 55 to 64, with 81.7 percent carrying debt.

In the same period, the average overall debt for these 55-and-older households more than doubled, to $70,370, according to EBRI.

In Harvel’s case, he piled up debt over years of taking care of his sick wife, Loretta, who died last year at 63. She had diabetes, was on dialysis and required two open-heart surgeries, Harvel said.

Health care bills are a leading factor contributing to the indebtedness of graying Americans.

Workers are paying more for employer-sponsored health insurance, while costs for medical care are skyrocketing. Eligibility for Medicare doesn’t begin until age 65, and it does not cover such expenses as hearing aids, dental care and long-term nursing care.

Meanwhile, more older homeowners are carrying mortgage debt into retirement. Making matters worse, declining housing values have cut into what had been a safety net for older Americans and retirees: their homes.

Some older consumers also are saddled with credit card debt. Among Americans 65 and older, for instance, the average amount of credit card debt rose to $10,235 in 2008 from $8,138 three years earlier, the largest percentage increase among all age groups, according to a survey by Demos, a New York-based public policy institute.

Moreover, other older Americans are haunted by student loans years after they, or their children, left school. Adults 50 and older owe 17 percent of the nation’s $870 billion in student-loan debt, according to a March report by the Federal Reserve Bank of New York.

One illness or emergency can throw a senior into debt, White said.

“If everything goes perfectly, they could manage,” she said. “If something goes wrong, something unexpected happens, they don’t have the liquidity to move on.”

While recent government data shows declining consumer debt as families cut back on spending and saved more money, not all older Americans can follow suit. Not only are most older Americans past their prime earning years, but many must dip into their savings to stay on top of bills — while those still working may make less than they did in previous years.

Low-income seniors with excessive debt are having a hard time digging out in an environment in which “job growth is slow and salary increases are minimal,” said Craig Copeland, a senior research associate at EBRI, who wrote the study on debt among the elderly.

The trend has been especially evident in the past two years, a period in which the eldest of the baby boomers began retiring, Jones said.

“There were a lot of people in this population that decided to retire without the same kind of assets that previous retirees had,” he said. “In fact, we began to see people with $60,000 in nonmortgage debt.”

In general, the association said, the average client at its nonprofit local credit counseling agencies has gotten older: 44.5 in 2011 versus 41 in 2007. The average client also was middle class and seeking help for reasons such as a job loss, reflecting the aftermath of the financial crisis, Jones said.

While some older Americans are able to delay retirement, not all can. Unable to find work or other sources of money, many seniors can’t manage their debt on a fixed income.

“These people don’t have the same options that others do,” Jones said. “They can’t in many cases find a job, and if they do, they have to work at a job at a lot less money than they’re used to.”

Norman Zimmering, 81, exhausted his savings trying to pay off medical bills for his wife, Harriet, who died in 2009. She had a heart condition as well as dementia, Zimmering said.

“Most of my money was spent on hospitals, nursing homes and whatever medication,” said Zimmering, who lives in a sparse Baltimore apartment.

Soon after his wife’s death, Zimmering said, he was laid off after 11 years as a security guard at the Sands Expo Convention Center in Las Vegas.

Unable to find work and keep up with medical bills, some of which he paid for with credit cards, Zimmering filed for bankruptcy last year, listing $42,020.87 in liabilities, mostly medical bills. A judge discharged his debts last year.

“I kept repeatedly getting big bills and big bills. I tried very hard. I couldn’t do it anymore,” he said. “I had to go into bankruptcy.”

Zimmering moved to Baltimore a year ago hoping to find a job here either as a security guard or piano tuner, but so far he hasn’t had any luck. He said his age and bad credit because of the bankruptcy hurt his employment opportunities.

“I even tell people, ‘I don’t care what you pay me, as long as it brings in some revenue and keeps my dignity,’ ” said Zimmering, whose primary source of income is $1,027 a month in Social Security.

Louise Carwell, a lawyer who works with low-income seniors at the Maryland Legal Aid’s consumer law unit in Baltimore, said her clients are dealing with a wide range of debt, from credit cards to medical bills.

Carwell and other public-sector attorneys who work with the elderly say indebted seniors want relief, a trend that has increased in the last several years.

“The anxiety that they get or they create within themselves from debt collectors, that’s really punishing,” Carwell said. “That’s why a lot of my folks file for bankruptcy.”

Bankruptcy filings among seniors have risen markedly in recent years, according to recent studies. In general, the median age of people filing for bankruptcy has risen, to age 43 in 2007 from 36.5 in 1991, according to research published last year by John A. E. Pottow, a law professor at the University of Michigan.

Mary Aquino, a staff attorney with Legal Aid’s Baltimore County Elder Law Program, said she recalled a 75-year-old client who was nine months behind on her mortgage, with $10,000 in credit card debt and an additional $36,000 in student-loan debt. The woman’s sole income was a monthly $1,100 Social Security check.

“She’s hoping to file for bankruptcy and keep her home,” said Aquino, noting that student loans are usually not discharged in bankruptcy.

Harvel, too, wants relief from his mounting debt.

Besides getting dozens of late and collection notices for his and his wife’s medical bills, Harvel is being sued by a funeral home that provided services for his mother, who died in 2009. Harvel said he put up the money for the service, using all his savings and cashing out some savings bonds. But he still owes $986, plus interest, court and attorney fees.

Harvel expressed a mix of guilt and remorse for racking up so much debt but said he simply does not have the means to pay it off.

After being homeless for eight months, Harvel now has a place to live, thanks to the Baltimore County Department of Aging.

A bankruptcy, Harvel said, would give him a fresh start and peace of mind. After Harvel put away about $200 to pay for bankruptcy in recent months, Del Pizzo, the Dundalk lawyer, agreed recently to file the paperwork pro bono.