Who has the advantage now becomes the question:

The Miami Heat with two of the final three games of this best-of-seven Eastern Conference finals at home?

Or the Boston Celtics, who now have the momentum and seemingly rejuvenation with Sunday night’s 93-91 overtime victory at TD Garden.

(PHOTO: Dwyane Wade of the Miami Heat struggles to get pass Rajon Rondo of the Boston Celtics in the second quarter during Game 4 of the NBA Eastern Conference Finals at Boston, Massachusetts on Sunday, June 3, 2012.) 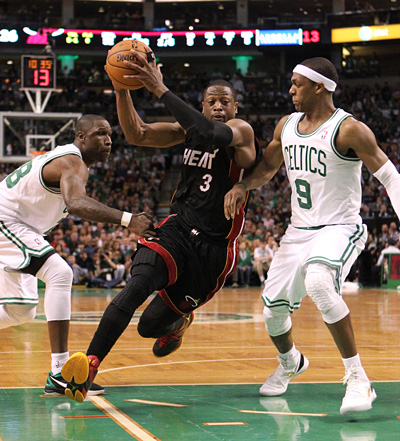 Back even in the series with a sweep of the two games on their court, the Celtics blew an early 18-point lead before coming together in overtime on a night that showed there is still plenty of fight left in the legs of Paul Pierce, Ray Allen and Kevin Garnett. And plenty of moxie from point guard Rajon Rondo.

The game ended on a wayward 3-point attempt from Heat guard Dwyane Wade, ending his night at 7 of 22 from the field.

Game 5 is Tuesday at AmericanAirlines Arena, with Game 6 Thursday back on the Celtics’ home court.

In a game of twists and turns, the most unforgiving came when Heat forward LeBron James fouled out with 1:51 to play.

Earlier, the Heat failed to close it out at the end of regulation, when forward Udonis Haslem was off with a jumper, after Wade and James were unable to break free for attempts.

James led the Heat with 29 points, with Wade recovering from early struggles to add 20. Haslem added 12 points and 17 rebounds.

In overtime, the Heat, with James watching from the bench, went down 93-91 with 21.4 seconds left after Rondo made only the second of two free throws.

After a timeout, the Celtics took a foul they had to give with 14 seconds left in regulation, leading to another Heat timeout. Wade then held the ball for his 3-pointer that was off at the buzzer. At the start of overtime, Pierce fouled out 38 seconds into the extra period, on a charge. Haslem then opened the scoring with a dunk with 3:18 to play. But Marquis Daniels then got to the line for the Celtics, making only the second foul shot to draw Boston within 91-90. Heat point guard Mario Chalmers then was off with a 3-pointer, but the rebound went out of bounds to the Heat.

But with Chalmers missing a drive, Rondo scored on the other end for a 92-91 Boston led.

A missed James shot followed, as did a Rondo miss.

But that’s when James was called for a charge and his sixth foul with 1:51 left, joining Pierce on the sidelines.

The Celtics then got misses from Allen and Garnett, and a pair of offensive rebounds from forward Mickael Pietrus before a missed Garnett jumper.

Battier then missed a 3-pointer, with the Heat, still down one, called for a loose-ball foul on Haslem.

That led to Rondo’s free throw and then Wade’s miss at the buzzer.

Early, in the fourth-quarter, a 3-pointer from Battier and a James transition basket with 8:54 to play brought the Heat all the way back from what had been an 18-point deficit. James’ basket completed a 13-1 run that bridged the third and fourth quarters.

Rookie guard Norris Cole then extended the run to 15-1 with a driving layup, putting the Heat up 76-74.

But Allen, who suddenly is Allen again, later hit a 3-pointer for a 79-78 Celtics lead, with a Garnett tip-in putting Boston up 81-78.

It went back and forth from there, ultimately to overtime.

The Heat made their comeback behind the hustle of Haslem, who was inserted into the starting lineup at the start of the second half, and Cole, who injected needed energy.

With Wade closing the scoring in the third period with a 3-pointer, the Heat went into the fourth within 73-68, yet another third period to offer salvation to the Heat this postseason.

Heat coach Erik Spoelstra shook up his lineup at the start of the third quarter, going with Haslem in place of Joel Anthony, who had started at center in place of Ronny Turiaf.

The Heat trailed 61-47 at halftime and it would have been worse had James not closed the first-half scoring with a 3-point play, after Boston had pushed its lead to 18 earlier in the second period.

James had 19 points at the intermission.

The Celtics were dominant early on the boards and from the 3-point line, with Rondo with 10 assists by halftime. That gave him his 13th game with double-digit assists this postseason, more than the 10 of the rest of the NBA combined.

Asked in his televised halftime interview how he was able to push past the Heat in the first half, Rondo said, “They’re complaining and crying to the referees in transition”

Earlier, in his televised interview after the first quarter, Spoelstra said, “We haven’t started defending them since we got to this city.”

That didn’t change until the third quarter.

The Heat were atrocious at the outset, falling behind 14-4 with a 2-of-7 start from the field with three turnovers. James and Wade both missed their first two shots during that opening drought, with Wade later falling to 0 for 4 and James to 0 for 3, as the Celtics extended their advantage to 18-4.

When Pierce then made his second 3-pointer of the opening period, Boston made it 21-6, before the Heat countered with a Battier 3-pointer.

The Heat briefly closed the gap when Kevin Garnett took a first-quarter break, but went into the second period down 34-23.

After not allowing any 30-point periods in the first two rounds of the playoffs, to the Knicks and Pacers, the first quarter was the fourth 30-point period yielded to the Celtics this series.

The 34 points were the most scored by the Celtics in a first quarter this postseason.

The Celtics entered aware that teams down 3-1 in best-of-seven NBA playoff series are 8-201 all-time when it comes to winning those series. The Heat was among the eight to do it, in the 1997 Eastern Conference semifinals against the New York Knicks.

The winner of this series faces the winner of the Western Conference finals between the Oklahoma City Thunder and San Antonio Spurs, with that series tied 2-2. The NBA Finals open on the home court of the West champion on Tuesday June 12.